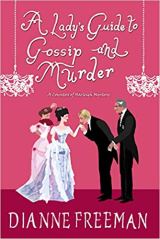 
Lady Frances Wynn, Countess of Harleigh, has been doing a little matchmaking. Her sister Lily is almost engaged to Leo Kendrick, a match Lade Frances approves of, although she would like them to wait just a bit longer to announce their engagement. Her cousin Charles Evingdon has been discreetly seeing Mary Archer, a local widow with society connections although apparently little to no money. Lady Frances is encouraging the match; Charles is that geeky, clumsy cousin with minimal social skills who could do much worse than the widow Archer. This match, however, has come to naught; Charles informs Lady Frances that he and Mary Archer will not suit and won’t say why. This isn’t really a problem until Inspector Delaney arrives to ask Lady Frances why Mary Archer is in possession of information she shouldn’t have. He, for obvious reasons, decided that Charles is a suspect in Mary Archer’s murder. So Lady Frances needs to clear Charles (he is her cousin, after all), as well as niggle out how Mary Archer came to have such intimate details about the Harleigh family finances.

Lady Frances and her next-door-neighbor George Hazelton have had interactions, social and private, in the past. They are once again working on the same case. Mary Archer has been supplementing what little income she had by writing a local gossip column, Miss Information. George’s political connections are such that Inspector Delaney has been required to pass all the gossip column research to George for perusal and discreet intervention. George, having other problems on his plate, delegates that task to Lady Frances and, in the interest of speed, her household. All sworn to secrecy, of course.

Freeman seems to have done her research. London, during the summer, is fairly somnolent in terms of high society and the events that revolve around aristocrats. This means Lady Frances has fewer people on her suspects list, and more time to deal with all the questions that arise during her investigations. Freeman has built a good supporting cast for Lady Frances, and the new introductions bode well for future entries in the series. George Hazelton features prominently, as one might imagine, and his mixed messages do their best to keep Lady Frances in a tizzy. In the meantime, Charles finds his own match, and there is plenty of opportunity for another Countess of Harleigh mystery in the future.