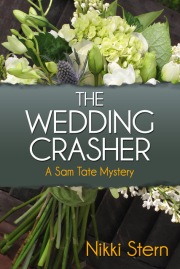 A brunette in a bridal gown turns up in Pickett County, Tennessee, throat slit and ring finger missing. She’s the latest victim of the Wedding Crasher, a serial killer who murders women just weeks before their weddings.

Samantha Tate is Picket County’s yoga-loving, poker-playing new sheriff, a former Nashville homicide detective who struggles with her inner demons. To catch the meticulous murderer, Sam will have to follow her instincts and ignore her worst impulses. Can she stop the Wedding Crasher before another bride-to-be dies?

Nikki Stern ticks a lot of my boxes in The Wedding Crasher with a female lead who is in law enforcement, a non-urban police procedural, a Southern setting. Small wonder, then, that I enjoyed this book from beginning to end. Speaking of the beginning, this one is in your face as we meet Sam Tate at a gruesome crime scene, no footdragging leading up to it, and that’s another one of my boxes.

Sam has her own issues from the past but she focuses on this string of brutal crimes with the help of Abdi Issen, her lead detective, and FBI agent Terry Sloan who’s been working these cases for several years. The first four murders happened once a year in the spring but then the killer skipped a year. Why? Is there a connection with a trauma from Sam’s past?

That trauma comes out in dribs and drabs but it helps us see how Sam’s core has grown and changed over the years, making her who she is today. This sort of thing can dampen my enthusiasm for a character because it’s often overdone but Ms. Stern handles this part of the story with finesse.

All in all, this is an intriguing look at a serial killer investigation with a lot of twists and turns, always a plus in crime fiction, and I’m looking forward to Sam’s next story.

An Excerpt from The Wedding Crasher

The dead woman lay in the clearing like a macabre version of Sleeping Beauty. She was dressed in a long-sleeved, high-necked ivory gown, set off by luminescent pearl drop earrings and a matching necklace that almost hid the dried blood around her throat. Her head rested on a satin pillow, her silky walnut hair spread behind her like a fan. The right hand held a bouquet of wilted flowers and rested on her chest underneath the left, absent the fourth finger. The ring finger.

Sheriff Sam Tate stood to one side of the grim tableau, arms folded, and took it all in: the victim; the tall white-haired man who knelt by the body; the deputy who walked the scene in throwaway boots, snapping pictures; the pale young man in running gear sitting on a rock, head almost to his knees; the uniformed officer who squatted beside him.

Sam had dressed in her standard uniform of pressed black slacks and a spotless white shirt. A shaft of early-morning sun bounced off the polished badge at her left breast pocket. On her right wrist, she wore a utilitarian watch. Three small studs twinkled along one earlobe, her single visible concession to a rebellious streak. She’d pulled her unruly dark locks into a tight braid. Ray-Bans shielded her green eyes, though not the line that formed between her brows.

One of the victim’s low-heeled white pumps had dropped off to reveal a slim ankle in hosiery. Stockings, not pantyhose, held up by an old-fashioned garter. Sam didn’t need to look.

He’s back, she thought, adding a curse for good measure.

Nikki Stern is the author of the inspirational HOPE IN SMALL DOSES, a 2015 Eric Hoffer Montaigne Medal finalist, and the thriller THE FORMER ASSASSIN, a 2018 Kindle Book Review category finalist. Her essays are included in three anthologies and she co-authored the interactive Café Noir murder mystery series, published by Samuel French. Eight of her short stories have been published in various online journals and she was a Mark Twain Royal Nonesuch finalist for her short story “Long Away and Far Ago.” Nikki is a member of Sisters in Crime and Mystery Writers of America.