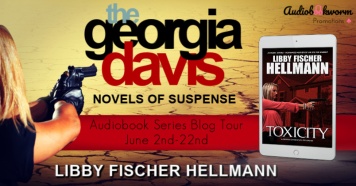 When pretty, smart Sara Long is found bludgeoned to death, it’s easy to blame the man with the bat. But Georgia Davis – former cop and newly-minted PI – is hired to look into the incident at the behest of the accused’s sister, and what she finds hints at a much different, much darker answer. It seems the privileged, preppy schoolgirls on Chicago’s North Shore have learned just how much their innocence is worth to hot-under-the-collar businessmen. But while these girls can pay for Prada price tags, they don’t realize that their new business venture may end up costing them more than they can afford.

Libby Fischer Hellmann left a career in broadcast news in Washington, DC and moved to Chicago over 35 years ago, where she, naturally, began to write gritty crime fiction. Fifteen novels and twenty-five short stories later, she claims they’ll take her out of the Windy City feet first.

Her novels include the now five-volume Ellie Foreman series, which she describes as a cross between “Desperate Housewives” and “24;” the hard-boiled 5-volume Georgia Davis PI series, and four stand-alone historical thrillers set during Revolutionary Iran, Cuba, the Sixties, and WW2. Her short stories have been published in a dozen anthologies, the Saturday Evening Post, and Ed Gorman’s “25 Criminally Good Short Stories” collection. Her books have been translated into Spanish, German, Italian, and Chinese. All her books are available in print, ebook, and audiobook.

Libby also hosts Second Sunday Crime, a monthly podcast where she interviews bestselling and emerging crime authors. In 2006 she was the National President of Sisters in Crime, a 3500 member organization committed to the advancement of female crime fiction authors.

Narrator Beth Richmond has recorded more than 100 audiobooks in the last decade from her studio on the Mendocino coast. Among her favorites are those from Georgia Davis series. “It is a privilege and pleasure to return repeatedly to such a vividly drawn character and world. Ms. Hellman’s books live inside me now, as if they were memories from my own life. What fun!”

She can be reached at brich@mcn.org 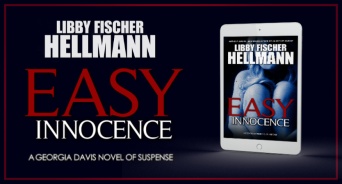 3 thoughts on “Spotlight on Easy Innocence by Libby Fischer Hellmann”