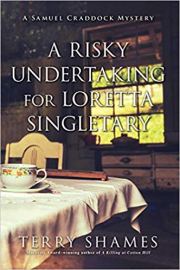 After using an online dating site for senior citizens, town favorite Loretta Singletary–maker of cinnamon rolls and arbiter of town gossip–goes missing. Chief Samuel Craddock’s old friend Loretta Singletary–a mainstay of the Jarrett Creek community–has undergone a transformation, with a new hairstyle and modern clothes. He thinks nothing of it until she disappears. Only then does he find out she has been meeting men through an online dating site for small-town participants. When a woman in the neighboring town of Bobtail turns up dead after meeting someone through the same dating site, Craddock becomes alarmed. Will Craddock be able to find Loretta before she suffers the same fate? Finding out what happened to Loretta forces him to investigate an online world he is unfamiliar with, and one which brings more than a few surprises.

It’s just another day in Jarrett Creek for Samuel Craddock when his good friend, Loretta Singletary, asks him to get involved in a church ladies’ issue, something he decidedly doesn’t want to do and he’s almost relieved when she has to leave to meet a friend. He does momentarily wonder why she seemed so skittish but police chief duties soon distract him. It isn’t until various people start realizing that they haven’t seen Loretta that he becomes not exactly alarmed but very curious.

Loretta is the essence of a settled, unremarkable woman so, when Samuel hears that she might be involved in online dating, he’s truly surprised. This is really out of character for her but what really disturbs him is that she has literally disappeared and, when he hears that a woman in a neighboring town is also missing, Samuel and his chief deputy, the energetic and opinionated Maria Trevino, begin to investigate in earnest. Following the few leads they develop soon brings them to the realization that Loretta could be in serious trouble and they don’t have much time to find her.

One thing I can always count on with a Samuel Craddock book is that, while typical police procedural action might be limited, Samuel has the mind and life experience that make him a thoughtful, intuitive investigator and he’s nearly always a step ahead of me. He notices things and he really hears what people say but, most of all, he recognizes that the unexpected is often the truth. He’s not perfect—modern social behavior sometimes baffles him and he can be reluctant to open up about himself—but he’s the kind of man I’d trust to have my back.

Samuel’s stories always focus on a particular issue and, this time, it’s the potential dangers of online dating, especially for older women…and men…who may be particularly vulnerable. Ms. Shames handles the topic quite nicely without  belaboring the point. To lighten the mood a bit, we’re also treated to the comings and goings of the townsfolk and the almost-feud over the annual goat rodeo.

This has been one of my favorite series since the very first book and I’m still just as entranced with Samuel Craddock and the denizens of Jarrett Creek. Once again, I stayed up all night and it was time well spent—who needs sleep when Terry Shames has a new book out?