Travel writing has been popular since a geographer named Pausinias published his Description of Greece in the second century, A.D.  Although many of the sites he described no longer exist, he is quoted in almost every current tour book of Greece.  Marco Polo wrote a travelogue, Captain James Cook kept a diary, and everybody knows about Darwin’s On the Origin of Species.  Any writing in which journey is the central theme can be described as travel writing.

The earliest travel books emphasized classical learning and a non-personal point of view.  Lawrence Sterne’s A Sentimental Journey Through France and Italy broke the mold.  Witty, insightful and crammed with the idiosyncratic opinions and tastes of his protagonist (the author’s barely disguised alter ego), the book established travel writing as the dominant genre of the second half of the 18th Century.  Not only did it inspire people to read about travel, it inspired them to set out to foreign climes in search of adventure.  This new bevy of intrepid explorers included many respectable women. 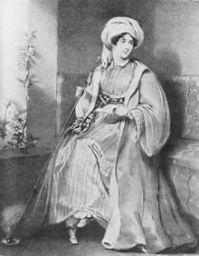 Jeanne Baret circumnavigated the globe between 1766 and 1769, albeit disguised as a man.  Defying convention, she bound her breasts with bandages and sailed with the French Navy as Jean Baret. Her Ladyship Hester Stanhope did whatever it took to go where she pleased.  She was the first European woman to cross the Syrian desert and conduct archaeological research in the Holy Land.  Isabella Bird is probably the most famous female globetrotter.  Armed with her trusty revolver, she toured the world and penned her experiences climbing mountains, riding elephants, and hanging out with outlaws.

All of these travelers recorded their exploits and their accounts were supposedly factual and true.  But the tendency to “coloration,” i.e., exaggeration and invention, has been around since the ancient mariners reported sightings of sirens and sea monsters.  Lying is, to some degree, inherent in all travel books just as reality is an element of all novels.

The devices of fiction have the ability to enhance and intensify travel narratives.  A novelist doesn’t write a description of everything she sees.  Instead, she selects the telling details, decides when and how they are revealed, and shapes the emotional topography.  She casts light on one thing, throws shadows on another.  “What raises travel writing to literature,” says William Zinsser, “is not what the writer brings to the place, but what the place draws out of the writer.”

I’ll be leaving next week on a trek through southwestern France where the Albigensian Crusades were waged against the “heretical” Cathars.  The Cathari bastides are haunting reminders of a very successful genocide.  I plan to write about this trip, whether as the setting for another Dinah Pelerin mystery or in a series of non-fiction essays, and I’ve been looking back over some of my favorite travel books for inspiration.

Huck Finn’s journey down the Mississippi captured the magic of that magnificent river “rolling its mile-wide tide along, shining in the sun.”  For Huck, it was both a physical and a mental journey.  Sharing a raft with a runaway slave changed his mind about race and what it means to own another human being.  Using the perspective of an “unsivilized” boy, Twain skewered the moral hypocrisy of the nation.

Raymond Chandler’s portrayal of Los Angeles created an indelible sense of place.  He peppered his novels with geographic detail and filtered his perceptions of the city through the wry observations and reflections of his detective, Philip Marlowe – the menacing architecture, the tough-looking palms, those dry Santa Ana winds that “make your nerves jump and your skin itch.”  The city assumed the importance of a character, seductive and glittering on the outside but rotten underneath.

Venice was the dominant character in Michael Dibdin’s Dead Lagoon.  His police detective, Aurelio Zen, conducted the reader into the seamier enclaves of his hometown, leaving behind the touristic city-as-museum and pointing out the decaying palaces, the rats scuttering about the canals at low tide, and the venality and moral cowardice of the politicians.  By exposing the city’s underbelly, Dibdin imparted an authenticity to the place that feels more real than a journalist’s report.

Real places have a way of drawing out fresh perspectives and insightful reflections from fictional travelers.  My books aren’t what you’d call gritty, but I haven’t shied away from the darker aspects of the places Dinah has visited.  She confronted the Australian government’s persecution of the Aborigines; the devastation of Native Hawaiian culture and appropriation of their lands; the historic oppression of the Sami people in the Norwegian Arctic; and the plight of the migrants washing up destitute and desperate on the beaches of the Greek island of Samos.  Wherever she finds herself, Dinah lifts the lid on unsavory secrets and bubbling resentments.  Is murder also in the offing?  Thereby hangs a traveler’s tale.

2 thoughts on “Lifting the Lid”