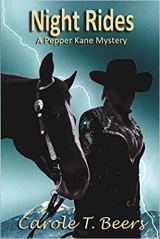 
For this adventure, former crime reporter Pepper Kane, along with her friend and business partner, Tulip Clemmons, is in Seattle. They’re riding in one of the northwest’s most important horses shows. A lot is at stake as riders compete not only for money, but prestige and reputation. The competition, we discover, is not always friendly.

On the first night, the women, accompanied by Pepper’s lover, Sonny Chief, are returning to Pepper’s on-site living quarters, when, after checking on her horse, she needs the fancy public restroom. While at first apparently deserted, she hears noises, moans, screams, thumping, scratching–all the sounds of a rather violent sexual encounter. She calls out, but there is no answer. Wondering if there was more going on than just sex, she reports what she heard to security, leaving a message when no one answers the emergency number.

Next day, a man, one of the judges in the competition is found dead⏤murdered. Pepper, not only fretting at the seeming inaction of the police, especially when they don’t seem interested in her report, but having a bit of detective type experience, soon takes a hand. When a second person is murdered⏤neither of them the most sympathetic of victims⏤what happens next has you wondering if she’d been better off to back away.

Odd things happen. Something as simple as a mug being stolen from a transgender competitor. An expensive bracelet Pepper’s daughter Chili has for sale in their store is stolen, and to wind things up, Chili is kidnapped and faced with certain death.

Well-written, snappy dialogue draws the reader forward. The action keeps one turning pages to find out what happens next. Pepper takes what seem like a few wrong turns, but always works toward an action-filled and twisty conclusion. The characters are well-fleshed out, but to me, in this particular story, the best part is when we are with the horses, riding in the ring, feeling the excitement and thrill of the show.