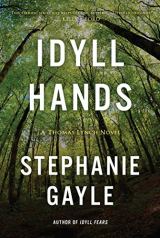 
Not to mince words, this is an excellent novel. The story travels between 1972 in Charleston, Massachusetts, and 1999 in Idyll, Connecticut. In its emotional beginning, Susan, the sixteen-year-old sister of a new policeman, Michael Finnegan, is running away from home, at least for a few days. Why, we don’t know for sure.

Twenty-six years later, in a town not far from Charleston, the new chief of police in Idyll, Connecticut, named Thomas Lynch, is confronted with allergies and the preserved bone of an unknown woman or girl, the cops in that town have named Colleen. The bone is from a body unknown and unnamed found years earlier.

And so the story begins. As it unfolds, Michael Finnegan, now an experienced detective and his boss, Chief Lynch, working together and separately, among the small force of law enforcement people, confront questions of other missing young women. And throughout the novel, the hard loss of Finnegan’s still missing sister is always present.

In carefully measured chapters, the search for the woman found in the grave in Idyll is laid out and the detectives draw ever closer to the murderer. At the same time, detective Finnegan continues to pick away at random small clues to the enduring mystery of his sister’s disappearance.

Scenes are carefully and sometimes elaborately described; the pace of the novel is intense, and readers will be treated to a small cadre of police individuals whose emotional investments in their careers are carefully laid out, along with the civilian sides of life. Readers will also be treated to an interesting look at the process of crime detection in this town where the authorities are anything but idle.

Reviewed by Carl Brookins, December 2018.
http://www.carlbrookins.com http://agora2.blogspot.com
The Case of the Purloined Painting, The Case of the Great Train Robbery, Reunion, Red Sky.

To enter the drawing for a print copy
of Idyll Hands by Stephanie Gayle, just leave
a comment below. The winning name will
be drawn on Thursday night, May 9th.
This drawing is open to the US and Canada.