Returning guest blogger Sunny Frazier, whose first novel in the Christy Bristol Astrology Mysteries, Fools Rush In, received the Best Novel Award from Public Safety Writers Association, is here today to talk about remembering the past.

I was having Chinese food with a group of young friends the other day. As my arm shot across the table for the soy sauce, I said “Excuse my boarder house reach.” 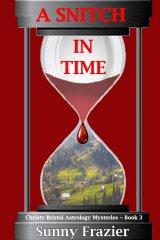 None of them knew what I meant. They probably didn’t know what a boarding house was.

When I was in high school there was a commercial on TV for Granny Goose potato chips. A man who looked like Charlton Heston, dressed in Western garb and holding a bag is confronted by banditos. “What’s in the bag, Goose?” they ask. He rips the potato chip bag open with his teeth. It became a catch phrase in my area of California.

When I was in the Navy and stationed in Rhode Island, a coworker was walking down the hall with a brown sack. “What’s in the bag, Goose?” It just automatically came out. All of

those New Englander eyes quizzically focused on me. That’s when I realized commercials were not the same nationwide.

A lot of my language lingers in the ‘60’s. I have trouble recognizing they are more than half a century old. Plus, I remember references the older generation used. “In for a penny, in for a pound;” “Don’t look a gift horse in the mouth;” Making a silk purse out of a sow’s ear;” “A day late and a dollar short.”

The Viet Nam war brought home slang like “Boo-coo,” a bastardization of the French “Boucoup” (many). As in “I have boo-coo bills and I’m broke.” 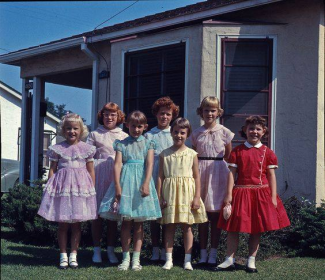 There are things this generation has missed out on: the fun of owning mood rings and pet rocks, the introduction of pantyhose, neighborhood games of Kick-the-Can and croquet. We put on shows in the garage just like Andy Hardy and adult neighbors would pay admission. We collected glass soda bottles and turned them into the stores for

penny candy money. Penny candy actually cost one cent, movies were a quarter and a McDonald’s hamburger was 15 cents.

I remember a time when we trusted store-bought goods until someone put poison in Tylenol bottles. Suddenly we feared packaged food and meds. They were so sealed tight it took power tools to open them.

Later generations missed out on Carnaby Street and the fab fashions. Twiggy thin was in, implants and big backsides were out. We wore mini skirts and Beatle hats, white boots and bell bottoms. Boys wore paisley shirts with white collars and cuffs. The madras prints were meant to bleed when you washed them. We did tie-die at home, cultured our own yogurt and created sand candles.

There were also the drugs, cults, communes, student riots and burning bras and draft cards. Free love created unwanted babies, hippies created backlash by conservatives. Peace signs and Flower Power did not Make Love, Not War as we hoped.

I wasn’t part of that. In fact, I joined the Navy to get away from what my generation was doing. Imagine my surprise when I discovered rampant drug use in the military. Drug testing was never done back then.

There are many things I’m grateful for these days. I love my computer, thank heavens they’ve replaced manual typewriters and Wite-Out. While I detest cellphones, I understand the advantages. Microwaves are indispensable. We thought Polaroid cameras with instant photos were the best until digital cameras came out. 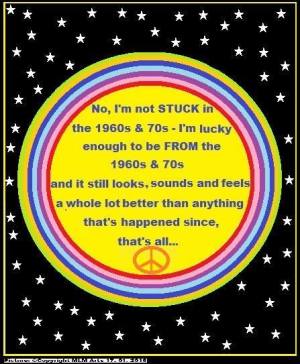 I do appreciate all the developments surrounding me today and I treasure the wonderful things we’ve left in the wake. If the adage “everything old is new again: and “history repeats itself,” let’s hope it’s only the fun that re-emerges.