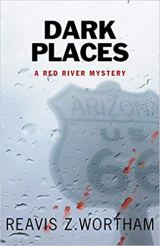 
Names come to mind when I read another Wortham Red River novel. Names and words like Rooster Cogburn and John Wayne and fundamental American attitudes. This author taps all those and more. His observation and understanding of how ordinary everyday American folk, the roots and bedrock of our nation, react in extraordinary circumstances; how they cope with subtle and alarming evil forces. Law enforcement? Sure, but developed from the very same basic beliefs and attitudes of the wider populace. This is a series of novels that will revive readers’ beliefs in the rock-solid foundations of the American way of life.

That said, Pepper and Top, the teen-agers being followed in this series, are restive. Close cousins for years, we find Pepper pulling away and longing for new horizons, such as running away to San Francisco to be a flower child. Without Top. It was a time of the rise of the hippy culture, free love and drugs.

Meanwhile, as storm clouds gather over Texas, murder, robbery and wholesale manipulation take place in the county. Ned Parker, Pepper’s granddad, leaves his constable’s post in Center Springs, Texas. He’s still troubled by a slow-healing stab wound in his belly, but when Pepper disappears, likely with a poorly thought of local boy, Ned decides to find her and bring her home. This chase forms the core of the novel which contains another thick plot line about the disappearance of two visiting businessmen looking to buy land in the area. Pepper’s uncle, currently the sheriff, is on this one.

The rain comes to the region and the law enforcement attempts to find the two missing men and deal with various other problems are hampered by frequent heavy rain. The author masterfully weaves the weather and other climate systems into the narrative and while this novel progresses more slowly than earlier novels, the level of satisfaction readers receive is substantial. In sum, a most satisfying and involving read, crowded with well-developed fascinating characters.

Reviewed by Carl Brookins, July 2018.
http://www.carlbrookins.com http://agora2.blogspot.com
The Case of the Purloined Painting, The Case of the Great Train Robbery, Reunion, Red Sky.