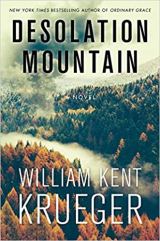 
Stephen O‘Connor, Cork O’Connor’s young son, has always had visions presaging tragedies.  This novel is based on one in which he sees an eagle shot from the sky and a menace he can’t identify at his back.  And then a plane carrying a U.S. Senator and her family crashes on Desolation Mountain.  Cork and Stephen subsequently join others attempting to find survivors and clues.

Soon, some of the first responders go missing, and father and son begin to investigate.  Then Cork inadvertently meets Bo Thorson, a character from a long ago novel, then a secret service agent, now a private investigator.  They join forces, but soon Cork begins to doubt Bo’s role.  The area is overrun with representatives of various federal agencies and is cordoned off.

The plot centers on the meaning of the vision and solution of the cause of the crash.  This is the 18th novel in the series, and provides, for the first time, a deeper look into Cork and Stephen’s relationship.  As is a constant in the series, it is well-written, and the descriptions of the North Country graphic and excellent.