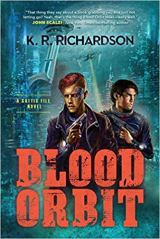 
Blood Orbit is a fascinating look at crime fighting in the distant future, set on a terra-formed planet and peopled by segregated and mixed races whose skin color often depicts their spot in the hierarchy. Sound familiar? In fact, nobody cares much when all sixteen patrons in a jasso (night club) are massacred in a dreadful, execution style blood bath. Motive for the crime is nebulous, but the powers that be want it either solved or swept under the carpet as quickly as possible.

Eric Matheson, a member of one of the most elite families in all the universe, has redirected his life to take on the duties of a rookie ofice, a private police officer, for the corporation that runs the planet of Gattis. By some fluke, he is selected to assist the lead inspector, D.J. Dillal. Dillal has recently undergone a surgery to integrate his brain with a highly evolved computer and is still healing, which, considering the stress he’s under to solve this crime, is in doubt. It’s apt to kill him first, especially as time is running out before the corporation considers destroying a whole race of people. An underground is fighting the corporation, but it’s a puzzle whether they’re working for the people’s good, or only their own benefit.

Peopled with an amazing cast of diversified characters, and with a plot that could be ripped from today’s headlines, this is a book to draw you in and keep you reading. At 492 pages, you’ll find complete, and satisfying, world-building.

My one complaint with the book concerned not the story or the writing, both of which are excellent, but the tiny, rather faded print. With my eyes not being what they used to be, I could only read for short periods of time, although if I could’ve, I would’ve.