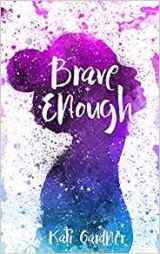 Cason Martin is not a typical high-school student. She attends—half-days and classes only. Isolating, yet unavoidable. As prima ballerina in the Atlanta Ballet Conservatory properly preparing to audition for the American Ballet Theatre, she only has time to dance. This plan has been in place for as long as Cason can remember. No distractions allowed—certainly not this nagging pain in her knee.

Everything changes in an instant when Cason learns that she won’t be pampering a pulled muscle. The injury, in fact, is a much bigger deal.

Natalie Martin probably wouldn’t be a warm-and-fuzzy maternal figure even if she wasn’t Cason’s artistic director first, single-parent second. Nonetheless, her assessment of her daughter’s diagnosis as an inconvenient time-burglar is almost stunning. Cason isn’t necessarily surprised by her mom’s reaction, but she can’t help being disappointed and frustrated.

Maybe she can’t count on her mother, but no one should suffer sickness alone. It is often other adolescents that have dealt with disease who come together to create the strongest support system.

Davis Channing conquered cancer, but now he has a different fight on his hands—with the demon of addiction. Recovering while repaying his debt to society has Davis volunteering in the very hospital that treated him. He may not be just what Cason needs, but the dude knows everyone and is effortlessly the epitome of a kind soul. His sincere desire to be beneficial is evident. The fact that he could use a friend right now, is not.

I read a lot as a teen, but I can only recall one instance when a serious illness affected anyone my age. Now, we have non-fiction and realistic-fiction options for high-school and middle-grade readers that talk about kids being seriously sick. Ms. Gardner joins awe-inspiring authors such as Josh Sundquist, Sophia Bennett, Jordan Sonnenblick, and John Green to fill this void.

Compassionately composed, Brave Enough is an honest journey from heart-ache to hope that deftly demonstrates the strength, resilience and adaptability of our youth.