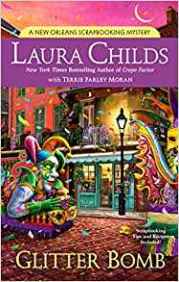 It’s Mardi Gras in New Orleans and scrapbook shop owner Carmela Bertrand is excited to be attending the Pluvius Parade along with her best friend Ava. Carmela’s ex-husband Shamus rides by the duo on his float at the head of the parade, when suddenly the revelry turns to disaster. Shamus’ float crashes and explodes, and although Shamus escapes unhurt, a member of his krewe is killed.

Just as New Orleans scrapbook shopkeeper Carmela Bertrand and her best friend, Ava Gruiex, are gleefully getting into the Mardi Gras festivities, all hell breaks loose when the Pluvius parade’s King Neptune float explodes with a huge plume of glitter. Carmela’s ex-husband Shamus Meechum goes flying and lands practically in front of them, battered and shaken but alive, unlike the captain of the krewe, Hughes Wilder, who’s quite dead .

Very soon, evidence points towards a deliberate bombing and Shamus begs Carmela to investigate before he gets arrested by Carmela’s boyfriend, Detective Edgar Babcock. It seems that Shamus has a good motive because he made a dodgy investment with Wilder, CEO of a hedge fund, and used bank funds to do so but there are several other potential suspects. Against her better judgement, and not because she’s overly fond of her philandering ex, Carmela agrees to look into who’s the real Neptune Bomber with Ava’s excited assistance and despite Edgar’s objections (useless, as he well knows from previous investigations) and a pond full of hungry alligators.

Scrapbooking tips and delicious recipes help make Glitter Bomb as charming and fun as the earlier books in the series and I’m already counting the days till Carmela’s and Ava’s next adventure.

To enter the drawing for a print copy
of Glitter Bomb, just leave a comment below.
Two winning names will be drawn on Sunday
night, November 18th, for one Advance
Reading Copy and one hardcover copy. This
drawing is open to the US and Canada.