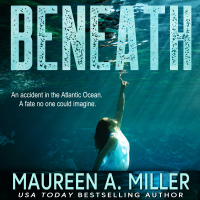 It was Stella Gullaksen’s final break before starting her freshman year at college. Joining her best friend Jill and Jill’s family aboard the Starkissed, Stella wakes up to a violent storm that capsizes the boat over a hundred miles off the New Jersey shore.

As the waves pull her under, Stella knows that she is going to die. Instead, an unusual current drags her deep into the underwater canyons of the Atlantic Ocean. Powerless against the raging waters, she is suddenly sucked into a ventilated cave. One by one, Jill and her family also emerge in the sunken cavern. With only a faulty diving flashlight to keep oblivion at bay, Stella and her best friend’s brother Colin search the cave in hope of finding a way back to the surface. What they discover, however, is that they are not alone. There are other survivors in this subterranean grotto – survivors spanning decades of maritime disasters.

Will this discovery prove salvation, or have they all been condemned to the same fate? A grim finale at the bottom of the sea? On an alliance forged by friendship and attraction, Stella and Colin battle to escape the danger that lies beneath.

I’ve always been fascinated by the Bermuda Triangle; is the phenomenon pure fantasy or science fiction or perhaps even real? No one has the definitive answer but there is no question that a lot of boats and planes have been found on the bottom of the Atlantic and disappearances continue to happen. The premise that Ms. Miller suggests in Beneath is not all that bizarre considering the oddities of the Triangle, is it?

Now, just suppose such a thing happened to you and you found yourself in a vast undersea cave system with other people who had been “saved” over a period of many years. You’d be filled with questions as are Stella and Jill’s brother, Colin, and no one would be surprised when they act on their curiosity, going in search of answers. They find some of those answers, leading to even more, but perhaps the biggest is, are they condemned to remain here until…

Stella is a likeable character—as is Colin but he’s less vibrant—and I had no trouble believing in her personality, her attitudes and her determination to brave the unknown. I’m glad, actually, that her story isn’t over yet and that a sequel is coming.

Brandy Skelly brought Stella to life for me even though there were moments when her narration wasn’t entirely successful. Between Ms. Miller’s intriguing story and Ms. Skelly’s telling of that story, Beneath is a tale worth hearing. 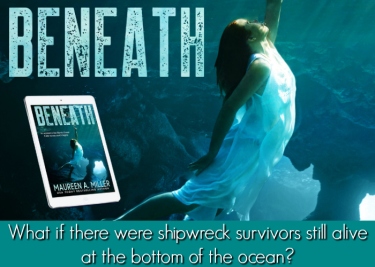 USA TODAY bestselling author, Maureen A. Miller worked in the software industry for fifteen years. She crawled around plant floors in a hard hat and safety glasses hooking up computers to behemoth manufacturing machines. The job required extensive travel. The best form of escapism during those lengthy airport layovers became writing.

Maureen’s first novel, WIDOW’S TALE, earned her a Golden Heart nomination in Romantic Suspense. After that she became hooked to the genre. In fact, she was so hooked she is the founder of the JUST ROMANTIC SUSPENSE website.

Recently, Maureen branched out into the Young Adult Science Fiction market with the popular BEYOND Series. To her it was still Romantic Suspense…just on another planet!

Brandy Skelly studied theatre in college, and even participated in storytelling festivals when she was growing up. She’s a practicing attorney, and loves to participate in ACX projects to keep her creative side happy and fulfilled. She can perform fiction and non-fiction, in neutral-American or Southern-American accents.

Brandy lives in North Carolina with her husband, toddler, and pound puppy. She has a soft spot for romance and she loves a good laugh!

4 thoughts on “Book Review: Beneath by Maureen A. Miller”