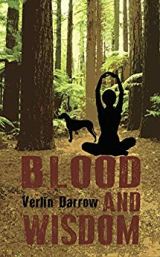 Aria Piper runs a New Age Spiritual Center near Santa Cruz, California. Karl Gatlin is a private investigator but has training as a counselor. The two are connected because they were both interns at the same center, though Karl decided he was much more cut out for a career as a PI than counseling people through their personal troubles. However, when Aria begins receiving threats and a beheaded body turns up at Aria’s center, she turns to Karl to investigate. That is the basic set up for the book, however, if readers are expecting a straight forward PI book, they are in for a surprise or two as this is a book that never quite settles on what sort of a book it wants to be. It has a little bit of something for just about everyone, but I was left wondering if there was enough of any one thing to satisfy anyone.

The number one strength of the book is the character development. What an interesting cast of characters Darrow has given readers! First we have a main character who is a PI with psychotherapy training, a second main character who is running a spiritual center which might or might not be a cult, some sort of flaky “enlightened” folks, some seriously bad dudes and lastly my favorite, Larry the dog who has so many human traits it is sometimes hard to remember he is a dog.

The second strength is the off beat humor in the book. This is really not my favorite type of book (think Carl Hiaasen or Tim Dorsey), but I do appreciate their craft and Darrow has the skills to carry this type of humor off.

I would like the author to firm up what genre he is writing though. Suspense, thriller, PI novel, or something completely different. Also, as fascinating as the odd set of characters were, sometimes their idiosyncrasies became a distraction from the plot.

Blood and Wisdom is the debut book for author Verlin Darrow. While I did have some issues with the book, there is definite potential for him as an author. It will be interesting to see what the next book brings.

2 thoughts on “Book Review: Blood and Wisdom by Verlin Darrow”