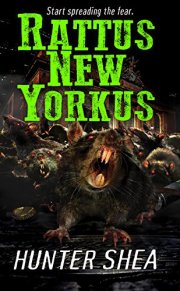 They were either some kind of rat council of elders, or the rodent world’s version of a repugnant Moe, Larry, and Curly.

Benny and Chris—divorcing but still working together—are exterminators but even they are overwhelmed by what they’re seeing in the rat population, ever since they distributed a new kind of poison a few weeks earlier. Suddenly, the horrible creatures are much bigger and way more aggressive. Worse, they seem to be reproducing like crazy and working together, planning, strategizing.

And then they disappear but we know they haven’t really disappeared.

I’d yet to meet a man more intimidating than five-foot Sister Veronica.

I confess, I love creepy horror stories that are full of black humor and this one has it in spades. One liners abound and I just couldn’t resist chuckling even while I was reading about nasty rats:

I never said I wasn’t a world-class dumb-ass.

I’m beginning to think that Hunter Shea is a master of high camp as well as “normal” horror and Rattus New Yorkus was every bit as entertaining as the first of the One Size Eats All series. The third story, The Devil’s Fingers, will be released in October but, in the meantime, I’m happy to say there are plenty of older books to romp through and a new novel, Creature, coming in September.

When treasure is discovered on a construction site in Seacrest, Oregon, word spreads fast and treasure hunters soon descend on the beach town followed by a marine salvage company. Unfortunately, the treasure came with a dead body and it turns out to be a long-missing man who Pippa’s uncle Hilt knew well.

Pippa Winterbourne loves her B&B, Moorehaven, and all the work that goes with it but she still has time to pull her friends and guests (mystery authors) together to find out what’s going on when accidents begin to happen and old secrets come to light. She’s also a bit distracted when her boyfriend, Lake, is hired as a boat pilot by the salvage company and one of the crew takes a special interest in Lake.

Any mystery reader will be intrigued by the collection of mystery authors who are staying at Moorehaven and the townspeople are equally as interesting and vividly drawn. To add a little drama, Lake’s ex-wife, Mallory, is the police chief and she and Pippa have a strained relationship at best. Needless to say, Mallory would just as soon Pippa stayed out of the investigation but Pippa can’t help herself.

That investigation is two-fold with the old case of the dead man and his pocket full of Spanish doubloons and a present-day murder so Pippa and her cohorts are kept busy. I have to say I didn’t figure it out till near the end, the best kind of mystery, and I enjoyed the investigation a lot. I’ll look forward to the third entry in the series.