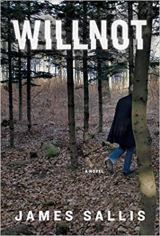 Although I had heard very fine things about this author’s work, it has [obviously] taken me much too long to catch up to him, but fortunately I have now corrected that oversight.  His newest book, Willnot, is written in what has been described as his “inimitably spare style” and “haunting and immensely readable,” and I found it undeniably very enjoyable.

From the publisher:  In the woods outside the town of Willnot, the remains of several people have suddenly been discovered, unnerving the community and unsettling Dr. Lamar Hale, the town’s all-purpose general practitioner, surgeon, and town conscience.  At the same time, Bobby Lowndes – – his military records disappeared, being followed by the FBI – – mysteriously reappears in his hometown, at Hale’s door. Over the ensuing months, the daily dramas Hale faces as he tends to his town and to his partner, Richard, collide with the inexplicable vagaries of life in Willnot.  And when a gunshot aimed at Lowndes critically wounds Richard, Hale’s world is truly upended.

The reader is told of the discovery of the dead bodies in the opening sentence:  “We found the bodies two miles outside town, near the old gravel pit.”  We are likewise introduced to Bobby only a few pages later.  We are told [p.o.v. is that of Dr. Lamar Hale] that he was only sixteen when “he wound up at the wrong end of a prank gone horribly south.  Left town on the school’s band bus for a football game twenty miles away, came back six days after in an ambulance and a coma.  I’d taken care of him for close to a year, touch and go at first, then the long plateau and rehab.  One of those strange mirrors life can throw up to you.”  When asked by the Sheriff what he thinks of what they have found, his reply is “I think we found a hole in the ground with bodies in it.  There’s not a lot more to be thought at this point, rationally.”

A second story line has to do with another of Lamar’s patients of many years, Stephen, now 23.  “When he was eighteen, his parents and sister died in a car crash, hit and run.  He was supposed to have been in the car as well but had begged off. Over the next couple of years we watched Stephen pass from wanting to find the person responsible, to believing that the crash was intentional, not an accident at all but willful murder.  ‘The boy’s gone gumshoe, as Richard said.’ ”  A little later, the sheriff asks him “You ever figure out why so many kooks wind up living here?  His response:  We are, after all, a town rich with uncommon history.”

I found the writing absolutely wonderful, too many instances to recount here, but e.g., at the hospital, a colleague tells him, “much of the time we don’t help them live longer or better, we only change the way they die.”

I plan to catch up on Mr. Sallis’ prior novels; this one is, obviously, recommended.