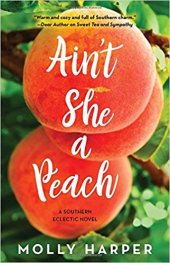 
Once again, the McCready family of Lake Sackett, Georgia, is back in fine fettle with their McCready Family Funeral Home and Bait Shop and, also once again, they’ve captured my heart. This time the focus is on Frankie, the youngish coroner/embalmer who considers herself well past the age of independence but her parents don’t know how to even begin to think of letting their precious only child spread her wings, so to speak. Sure, she sneaks off to Atlanta occasionally for a night of satisfying rowdiness but she can’t make herself move out (although she has disabled the location service they use to track her). There are very good reasons for this helicopter parenting but, really, she needs to grow a pair!

There’s a new Sheriff in town, Erik Linden, and while Frankie has a few, or a lot, of philosophical differences with Erik, including his queasiness around her dead customers, she’s finding it very hard to resist the man. Meanwhile, the rest of the McCready bunch are around and about and the town’s Halloween Trunk-R-Treat festival is coming up while a teenaged desperado has it in for Frankie for some reason.

The whole rambunctious McCready clan is a family I’d love to be part of and this fourth book in Molly Harper‘s series is just as much fun as all the others. Oh, I do hope there will be more!

LOL, I’m still chuckling over this book and I have only myself to blame for not having indulged in Hunter Shea‘s work before. Polo Springs, Florida, is a quiet little place but people are starting to notice that the lizard population, specifically small iguanas, seems to be popping up everywhere. Not just popping up—slithering and scampering and the little beasts apparently have lost all fear. Not so the humans in this town, folks like Frank who’s running from the mob and Ann Hickok, the very unlikely mayor who’s only 18 years old. Everyone in Polo Springs has stepped into their own Godzilla movie and the future’s looking very, very dim.

Polo Springs is about to get a rude awakening and they’ll wish they had those little iguanas back. In scenes that are alternately grisly and scream-inducing but also high camp, we learn the answer to the question: can anyone save this town from the invasion of giant people-eating critters?

There’s nothing easy about high school, as most of us know, but senior Michael has it worse than some. First of all, he’s gay. No big secret there but he’s almost painfully shy and definitely insecure when it comes to actually finding “the right one” or even one who will do for right now. He’s also saddled with his younger brother, Robbie, aka the Big Mistake and family life pretty much revolves around Robbie with his multitudes of allergies and other issues. On the positive side, he has an awesome best friend, Brie, and she makes life in Stewart’s Crossing, Pennsylvania, tolerable although Michael is way past ready to get out of Dodge.

And then along comes Daniel Florez and life for Michael will never be the same again. Luckily for him, Daniel has a little more self-confidence—really, he’s almost oblivious to what’s not supposed to work or maybe his home life has just given him a thicker skin so he’s not quite as vulnerable. Whatever it is, Daniel is not afraid to make the first move and the second and the third… Suddenly, things are looking up for these two really nice kids and the future might be bright but there are some side effects, including resentment from Brie, but why are strange things happening to Michael, like awesome SAT scores? And, minor detail, why is the FBI hanging around spying on Daniel?

With a bit of fantasy and a lot of high school angst, not to mention lots of humor and love of all sorts, Neil Plakcy has created a story that had me smiling a lot and cringing just a little (in a good way) and I definitely want to know what Michael and Daniel are going to be up to next 😉

One thought on “A Trio of Teeny Reviews”