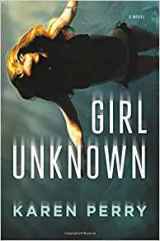 In this story of a girl who tears apart the lives of all the members of a family, author Karen Perry (actually two authors Paul Perry, Karen Gillece) shows how assumptions and lies affect the most basic relationships. David Connolly, a professor at an Irish university, his wife Caroline, and their two children, teenager Robbie and eleven year old Holly, are getting along as well as any family. There was a rough patch the previous year, when Caroline was on the verge of an affair, but she pulled back, and family life is getting back to normal.

After class one day David is approached by a freshman student, a frail and beautiful young woman by the name of Zoe. With her masses of white blonde curls, she seems otherworldly, and David can’t believe his ears when she tells him “I think you might be my father.”

David had an affair with Zoe’s mother Linda while he was in graduate school, before he married Caroline, and Linda never contacted him to say she was pregnant. Zoe offers to mail in a DNA test, and David meets with her at a local pub to talk it over. Zoe shows him the positive results, and after he tells Caroline about Zoe, the recriminations begin. Zoe claims Caroline insulted her, and physically assaulted her. Zoe says that her stepfather threw her out and she is destitute, but when David visits the stepfather, he discovers that Zoe had been given up for adoption, had only appeared in her birth mother’s life the year before she died, and had been left money for her studies. When confronted, Zoe claimed the check bounced.

The reader wonders why David and Caroline didn’t check out her story more, and when they did, they didn’t act on it. They allowed her to live with them even though she had been proved to be a liar. She manipulated them, and their friend Chris, an older man who was taken in by Zoe’s lies. The tragic and somewhat surprising conclusion could have been avoided had they been more vigilant. But they vetted Zoe less than they would a minimum wage worker. The story is told from the viewpoints of David and Caroline, in alternate chapters. Readers who enjoy psychological suspense, like Gillian Flynn’s Gone Girl or Jodi Picoult may enjoy the shifting realities of this book. Perry is the  author of The Innocent Sleep and other books.

One thought on “Book Review: Girl Unknown by Karen Perry”