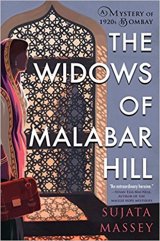 
Summary: Perveen Mistry, while assisting her father with an estate case, uncovers family secrets and deceit among the household of wives and children left behind after the patriarch’s death. Her English friend from school assists with her investigation.

The Widows of Malabar Hill begins what will hopefully be a long series with Perveen Mistry as the protagonist. Perveen is an Oxford educated lawyer working with her father in his law practice in the 1920s in Bombay, India. While at that time women could not be admitted to the bar and therefore could not represent clients in court, Perveen was able to perform much of the paper work of the law practice from writing wills to helping clients understand their legal positions. As the book opens, that is where readers find Perveen. Her father is the executor of a recently deceased mill owner who leaves behind three widows and a number of children. The person acting as their guardian has presented a document signed by the three widows stating they wish to forgo their rightful inheritance and turn their dowry gifts over to the trust which the guardian controls. There are two concerns with the document.  First there is some question regarding the signatures and secondly, the document also changes the focus of the trust’s mission, something that cannot so easily be done.

Because the women follow the custom of purdah (complete separation of the sexes), Perveen’s father would not be able to meet with the women, but Perveen can. Perveen goes to the widows’ home to speak with each of the women separately to have them each sign an individual agreement  but also to make sure the women understand exactly what they have agreed to give up and what the stated new mission of the trust is to be. While she is visiting with the second widow, the  guardian returns, overhears what she is saying and orders her to leave. Later she realizes she has left her briefcase and returns to retrieve it only to find the guardian has been murdered. What follows is an excellent murder mystery in which Perveen enlists her English friend from Oxford now living in Bombay to assist her.

There are so many things to love about this book beyond the murder mystery.

Besides the obvious crime to be solved, there is another entire story told throughout the book involving Perveen’s earlier marriage to a handsome businessman from Calcutta. Shifting back and forth from 1916 and 1917 to the story’s present day 1920s, we learn the details of how the couple met, married and why the marriage fell apart. Through this we also have a mini look into the marriage customs of India at that time, some extreme as well as some even then archaic practices.

The historical details the author has included really puts the reader in the 1920s in Bombay. The jumble of the various religious and cultural entities that somehow manage to co-exist is interesting and quite impressive.  Many cultural traditions are included and explained through actions giving readers a sense of being there rather than lectured to.

Included at the end of the book are some historical notes from the author. I would recommend reading those before reading the book. The notes really set the stage for the book.

This was the first book  I read in 2018 and a book I was sorry to see it end. What a great way to start the year.

To enter the drawing for a hardcover
copy of The Widows of Malabar Hill
by Sujata Massey, leave a comment
below. The winning name will be
drawn Thursday evening, June 21st.
This drawing is open to
residents of the US and Canada.

11 thoughts on “Book Review: The Widows of Malabar Hill by Sujata Massey—and a Giveaway!”