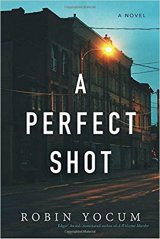 Fans of Chuck Logan may find this book an attractive addition to their library of crime thrillers. Yocum tends toward the more brutal and darker side of the genre, but there are definite similarities.

Decades after his last-minute basket to help the Mingo Junction Indians win the Ohio state high school basketball championship, Duke Ducheski has finally realized his dream—to open a fine restaurant in his home town and get out of the steel mill that dominates his home town. He also pledges to himself to avoid becoming involved with the nasty crime family that rules the valley.

Steel manufacturing in this Ohio valley is not the only enterprise dominating the town. The other presence is the mob, a tight-knit group of entrepreneurs who control the gambling, drug sales and prostitution action in town. The mob boss is aging Salvatore Antonelli. His principal enforcer is a local boy named Tony DeMarco.

When Duke opens his restaurant with some assistance from his long-time high school buddies Moonie and Angel, things are looking up for the forty-year old divorced mill worker, and then he disappears. His disappearance is triggered by an elaborate plan concocted by Duke to rid himself of the heavy arm of Tony DeMarco, and of other obligations. He enlists the aid of former school buddies and a grandfather-like figure who owns an established bar in town.

For anyone who has experienced small-town dynamics, long-time established disagreements and feuds, the slow revolutions of time and the maturation of certain individuals, rings true. The author has established a true town character, as well as the characters of both principal and peripheral players.

The novel is characteristic of the author’s work, painstakingly detailed, accurately nuanced, as is the dialogue. There are several violent encounters throughout the novel, most of which result in reduction of the population.

Everything in the book is true to the premise and well written. Fans of this style of crime fiction should be very happy and I recommend the novel.

Reviewed by Carl Brookins, March 2018.
http://www.carlbrookins.com http://agora2.blogspot.com
The Case of the Purloined Painting, The Case of the Great Train Robbery, Reunion, Red Sky.

To enter the drawing for a trade
paperback copy of A Perfect Shot
by Robin Yocum, leave a comment
below. The winning name will be
drawn Friday evening, June 1st.
This drawing is open to
residents of the US and Canada.

5 thoughts on “Book Review: A Perfect Shot by Robin Yocum—and a Giveaway!”