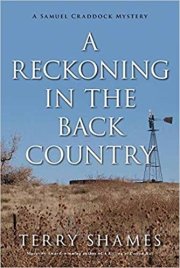 When Lewis Wilkins, a physician with a vacation home in Jarrett Creek, is attacked by vicious dogs, and several pet dogs in the area around Jarrett Creek disappear, Police Chief Samuel Craddock suspects that a dog fighting ring is operating in his territory. He has to tread carefully in his investigation, since lawmen who meddle in dog fighting put their lives at risk. The investigation is hampered because Wilkins is not a local.

Craddock’s focus on the investigation is thrown off by the appearance of a new woman in his life, as well as his accidental acquisition of a puppy.

Digging deeper, Craddock discovers that the public face Wilkins presented was at odds with his private actions. A terrible mistake led to his disgrace as a physician, and far from being a stranger, he has ongoing acquaintances with a number of county residents who play fast and loose with the law.

OK, let’s deal with the elephant in the room. Yes, dogs are a crucial part of this story and they’re involved in bad things. Yes, harm is done BUT it’s important to note that most of it is offpage and it’s not gratuitous in the least. The central theme, that of dogfighting, is an evil in our world, one that causes many people to look the other way because the horror of it is so difficult to comprehend. Even if you’re squeamish about animals being harmed, I strongly encourage you to read this book to learn more about how this works and why it so often seems to escape scrutiny that could help stop it. Besides, all the dog activity here is not bad; there’s a little fellow named Dusty you won’t want to miss.

Dogfighting is not what brings Samuel to the home of Lewis and Margaret Wilkins, though, and discovering why this man is missing keeps him busy around the Thanksgiving holiday. This is a lake family, meaning vacationers, so they’re not well known in Jarrett Creek and Samuel is the only member of the police department on hand. He’s doing the best he can but no one is prepared when a body is found, a body that has been savaged.

Technically speaking, the investigation of a violent death should be run by the Department of Public Safety but they rely on Chief Craddock to get things started. It doesn’t take long for him to see that this is going to be complicated and leads take him in several directions. Dr. Wilkins was apparently not a pleasant man and he had some serious problems including a malpractice suit and high stakes gambling. There’s also the question of how and why dogs would have attacked him.

On a more personal note, Samuel has reason to question his relationship with Ellen when he meets another woman and he also takes in a tiny puppy he found near the crime scene. He won’t keep the dog, of course, because he doesn’t want one but Dusty is there for now and Samuel’s resistance just might be futile. Certainly, he offers a bit of a distraction as Samuel and his deputy, Maria, follow those disparate leads to come to a final conclusion.

I was just as puzzled as Samuel almost to the very end and, even then, there were a few surprises. Once again, Terry Shames has captivated me with not only a terrific story but with Samuel himself, a man of great integrity and the wisdom and confidence of his years but one who isn’t afraid to challenge himself on a personal level. A Reckoning in the Back Country is going on my list of best books read in 2018.

To enter the drawing for a trade
paperback copy of A Reckoning in
the Back Country by Terry Shames,
leave a comment below. The winning
name will be drawn Monday evening,
May 14th. This drawing is open
to residents of the US and Canada.