Sally Solari is busy juggling work at her family’s Italian restaurant, Solari’s, and helping Javier plan the autumn menu for the restaurant she’s just inherited, Gauguin. Complicating this already hectic schedule, Sally joins her ex-boyfriend Eric’s chorus, which is performing a newly discovered version of her favorite composition: the Mozart Requiem. But then, at the first rehearsal, a tenor falls to his death on the church courtyard–and his soprano girlfriend is sure it wasn’t an accident.

Now Sally’s back on another murder case mixed in with a dash of revenge, a pinch of peril, and a suspicious stack of sheet music. And while tensions in the chorus heat up, so does the kitchen at Gauguin–set aflame right as Sally starts getting too close to the truth. Can Sally catch the killer before she’s burnt to a crisp, or will the case grow as cold as yesterday’s leftovers?

Good food and good music go together beautifully but not so much when death—most likely murder—is in the mix. Sally Solari had looked forward to singing in the chorus performing this special piece but gets drawn into the peculiarities surrounding Kyle’s death. She has very little spare time in her life for this, though, because she’s working at both her family’s restaurant and the one she recently inherited from her aunt but Sally is a Type-A Energizer Bunny who can be downright exhausting. In fact, the one weakness (in my mind) was that, because Sally is often off chasing leads, we don’t get to spend as much time as I would like in the restaurants but then I’m an unofficial foodie 😉

Nobody wishes death on people but Kyle was not a pleasant person and, quite frankly, he won’t be missed by many other than his girlfriend, Jill. It isn’t long before possible motives seem to pile up and Sally becomes suspicious about several possible killers but I have to say it took me a while to settle on one. Before Sally can bring the perpetrator to justice, she becomes a target herself.

As a former attorney, Sally is probably more qualified than most amateurs to investigate a crime and that lends her snooping a certain credibility other amateurs don’t have but her rationale still doesn’t hold much water. That’s okay, however, because (1) this is a cozy and sleuths in cozies don’t need a lot of justification and (2) I enjoyed this mystery as much as the first in the series. Let’s face it, Sally and her family and friends are fun to be around—I especially enjoyed re-connecting with Javier and Eric—and we’re rewarded at the end with a handful of recipes that just might entice you to try them out. I’m feeling the munchies for the grilled cheese sandwich right now 😉 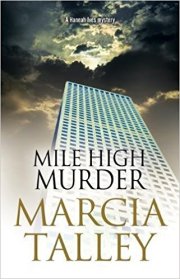 Hannah Ives embarks on a trip to the Mile High City on a fact-finding mission. But is she about to get ‘high’ on murder?

It’s a well-known fact that some of the Reach for Recovery cancer support group survivors Hannah Ives works with take marijuana. Recreational use of the drug may be illegal, but a few, like Maryland State Senator Claire Thompson, are prescribed it on medical grounds.

Claire has co-sponsored a Cannabis Legalisation Bill and wants Hannah to be part of a fact-finding task force that testifies before the Maryland State Senate.

Before long, Hannah is in Denver, Colorado – the Mile High City – staying at a B&B with a group of pot pilgrims and medical refugees – some of whom, like her, are on a mission for information. But when one of the group is found dead, and a closer inspection of the body reveals they may not be who they seem, Hannah is plunged into a dangerous cocktail of drugs and death.

Hannah Ives has been a comfortable fictional friend for a long time now and I’m always happy to see a new book come out. This time she gets involved in “research” to bolster State Senator Claire Thompson’s hopes to get a marijuana bill passed in Maryland, one to broaden and organize the specifics of already passed legislation that legalized the drug for medical use. To do this, they have to go to a state where recreational pot use is already lawful so they head out to Colorado, Denver to be specific. As a long-term cancer survivor, Hannah doesn’t need medical marijuana but Claire has a prescription and is inclined to use it even if she’s at risk of being caught breaking the law.

Hannah decides to go, mainly because she’ll have a chance to testify before the senate, a taste of the old days when she dealt with bureaucrats on a regular basis. This seems like a fairly simple task but Hannah did try to tell Claire that Hannah seems to attract dead bodies, a lengthy list of them, in fact. Still, they didn’t expect to find themselves so completely surrounded by hippie types and a million different ways to indulge at their “bud-and-breakfast”, Bell House…nor did they expect a fellow guest to be a victim of foul play.

I think the mystery here is a little less suspenseful than in Hannah’s previous adventures but I still had a good time learning all the ins and outs of legalized marijuana and watching Hannah do what she does so well, identify a murderer. Fans will be happy to see her again (and, Paul, her lovely Navy professor husband) but new readers might want to start with at least the first book to have a better idea of who Hannah is.