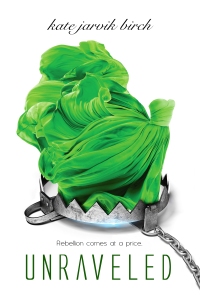 After exposing the dark secrets about NuPet’s breeding program, forcing them to repeal the law that allowed genetically modified girls to be kept as pets, she thought girls like her would finally be free. She never dreamed that it would backfire. NuPet may have convinced the public of their intentions to assimilate pets back into society, but Ella knows it’s a lie.

Now, with the help of a small group of rebels, Ella and Penn, the boy she’d give up her life for, set out to bring down NuPet for good. But when her group gets implicated in a string of bombings, no one is safe. If she can’t untangle the web of blackmail and lies that extends far beyond NuPet’s reach, she won’t just lose her chance at freedom, she’ll lose everyone she loves.

The author of the Perfected trilogy, Kate Jarvik Birch, created a world and story in which girls are raised to be pets, a glorified form of slavery, and I was enthralled by the first two books, especially with the innovative ideas Ms. Birch had. This third and final entry is just as creative and I was fascinated with the twist on our own animal rights activists’ dramatic, sometimes deadly, attacks on the facilities where animals are held. In those circumstances, the animals are often freed in order to save them from experimentation and imprisonment; in Unraveled, it’s the “animals”, the genetically modified girls, who are determined to stop the travesty.

In the US in current times, there is a lot of discussion about the members of congress and whether they are competent, decent, judicious people with good intentions but they don’t hold a candle to the one in this story, the man who owned Ella and father to Penn, the young man Ella loves. Many young adult stories overdo it with the romance, in my opinion, but this love story that has developed over three books is natural and organic, the way it should be.

Ella and Penn, especially Ella, have been fighting for the rights of the pet girls but now face a new betrayal, one that forces them to lead a small group in rebellion. Ella has grown, mentally and emotionally, by leaps and bounds since her time as a pet and has become something of a heroine, always with justice as her goal. Tension rides high on nearly every page in this tale and I think this was a fitting end to a terrific series. 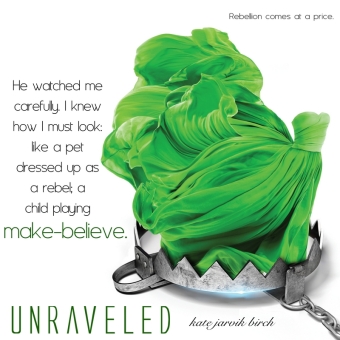 An Excerpt from Unraveled

No one glanced up at us as we left. We were inconsequential, just two kids leaving a pizza place. And that’s exactly what we felt like—kids. Powerless. Weak. Alone.

The bell on the door jingled lightly once more, and we stepped back out into the night. Once again, the sound of jazz music drifted out of the bar next door. I paused, listening to the soulful cry of the saxophone. For a moment, I closed my eyes, focusing on the full, round tone.

And then, just as the last note of the song died away, the bomb went off.

One single note rang in my ears.

The saxophone… It had just been playing, wasn’t it? I could remember the low, sweet crooning, but that wasn’t what this sound was.

I shook my head and tried to bring a hand up to my eyes, but something held it clamped down at my side. I tried to wiggle free, but there was something pressing my back, too, making it hard to breathe.

I coughed. My mouth was dry, thick with dust and the taste of metal.

I blinked, trying to turn my head.

In front of me the ground spread out like a battle field.

Red and blue lights blinked behind a cloud of dust. Dark forms moved left and right, up and down. Long limbs waved to one another.

My cheek pressed against something rough.

“Here’s one,” someone said. They sounded far away, a voice inside a bubble floating somewhere high above my head.

The weight on my back lifted, and a hand slipped beneath me, lifting me from the ground. I choked in a deep gulp of air and balanced on my wobbly legs. Even with the world tipped vertically once more, I couldn’t make sense of it.

The dark outline of Penn stumbled toward me.

Behind him, the building crumbled in on itself. Brick and cement.Wire and steel.Here and there a tipped table, a smashed chair. Broken glass littered the ground, glittering with the orange light of flames that glowed inside the hole where a door had just been. A door. A door. The door that had just jingled shut behind me. 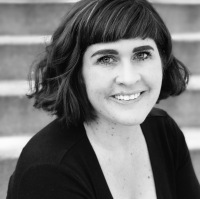 Kate Jarvik Birch is a visual artist, author, playwright, daydreamer, and professional procrastinator. As a child, she wanted to grow up to be either a unicorn or mermaid. Luckily, being a writer turned out to be just as magical. Her essays and short stories have been published in literary journals, including: Indiana Review and Saint Ann’s Review. She lives in Salt Lake City, Utah with her husband and three kids.