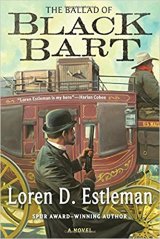 From the publisher:  Between July 1875 and November 1883, a single outlaw robbed the stagecoaches of Wells Fargo in California’s Mother Lode country a record twenty-eight times.  Armed with an unloaded shotgun, walking to and from the scenes of the robberies for hundreds of miles, and leaving poems behind, the infamous Black Bart was fiercely hunted by James B. Hume, Wells Fargo’s legendary chief of detectives.  Between robberies, Black Bart was known as Charles E. Bolton, a distinguished, middle-aged man who enjoyed San Francisco’s entertainments in the company of socialites drawn to his quiet, temperate good nature and upper-class tastes.

One of the most entertaining of the many entertaining aspects of this novel is that, true to Black Bart’s talents and propensities [he signs himself “Po8,” after all], the author begins each chapter [26 in all], as well as the Afterword, with a four-line verse, wonderful creations all, as is the book itself.  I will quote only the first and last two of these.  Beginning the book, on the first page of Chapter One:  “This is the story of bandit Black Bart; who used the gold country to practice his art.  His brush was a shotgun, his canvas the road, as he painted his way ‘cross the Old Mother Lode.”  And he ends the book with another:  “So here I’ve stood while wind and rain have set the trees asobbin’; and risked my life for that damn stage that wasn’t worth the robbin.”  And before the Afterword:  “My tale it is finished, and my race it is run; but there’s one more confession I owe everyone.  I speak not of inventions, though admit to this crime; I own to the evils I’ve committed in rhyme.”  Everything in between is equally wonderful.

As the book begins, Charles Bolton is described thusly:  “Everything about this man was reserved … A man who drank rarely, smoked not at all, and spent his words as if they assayed out at sixteen dollars to the ounce, was regarded as some kind of sage.”   The man loved gambling, on horse races or prizefights.  That first chapter ends with a rhyme as well:  “Come listen to my story, I’ll not detain you long. A singing and a humming this simple silly song.  ‘Tis of the old ex-convicts, the men who served their time for robbing mountain stages of the old Wells, Fargo line.”

Charles E. Bolton was a mining magnate who knew him only in that capacity.  But one who clung to a shotgun, “a comforting weight in his hands,” when he sets out to rob the stagecoaches of that firm, referred to as “the Company,” of whom we are told “the frugality of Henry Wells and William Fargo was nearly as infamous as their business practices.” His object was only the ironbound strongbox held at the driver’s feet, never harming any passengers in the process.

Sheriff Benjamin Thorn, who’d held that position for 15 years, and Chief of Detectives James Hume are charged with hunting down the robber, and they prove to be worthy opponents of Black Bart.

Another excellent book from this author, and highly recommended.