Retired inspector Jack Bertolino straddles two perilous worlds. Known for his impeccable police work, Jack has also done a priceless favor for an infamous Mafia Don: he saved the gangster’s kidnapped daughter from being sold into the sex trade, and brought her safely home.

In Jack’s line of work, he can’t help but have friends—and enemies—on both sides of the law.

So when FBI agent Luke Hunter goes missing after a deep undercover assignment with that same mob boss, the FBI calls Jack in, looking for a favor. With his connections and skills, Jack’s the only man for the job: find Luke Hunter, dead or alive.

The Mobster operates an illegal gambling yacht in international waters off of Southern California, and when Luke went missing, so did half a million dollars of the mob’s money. As Jack dives into the case, he’ll learn the true mystery isn’t the agent’s disappearance, but something far more ominous…

An Excerpt from The Fourth Gunman

Twenty-four hours had passed since the death of Luke Hunter, and the weather had turned nasty. The sea was whitecapped, the crescent moon blanketed by a thick marine layer. A perfect night for what Roxy and Trent had to accomplish.

A perfect night to dump a body.

Trent was piloting the catamaran, heading south toward the San Pedro Channel and powered by the auxiliary engine. He knew the depth of the basin was good for at least 2,250 feet. He’d studied the charts, set the GPS, and they were just a few minutes from their destination.

Trent looked right at home, almost regal, standing behind the wheel of the craft that bucked, rolled, and cut through the waves, never veering off course. He was a Saudi national and a U.S. citizen, raised in the States from the age of eight, so he had no discernible accent. He was twenty-eight years old, with a boyish open face, a buffed physique, a swarthy complexion, buzz-cut brown hair, and gray eyes that could set Roxy’s heart thrumming. A finely inked tiger ran the length of one muscled forearm, the tattooed claws drawing red blood.

Roxy stepped out of the cabin and carefully made her way behind him, wrapped her arms around his six-pack, and leaned her cheek against his back, trying to still the beating of her heart.

Trent gave her hand a firm squeeze before grabbing the wheel with both hands. “You’re a brave woman, Roxy,” he shouted over his shoulder, fighting the howling wind. “A warrior.”

The moment he announced they were approaching their destination, the GPS system gave off a shrill cry. The night was black; there were no other boats in the area, no container ships navigating the channel. It was time to get to work. He shut off the engine, locked the wheel, and lowered himself into the cabin, followed by Roxy.

Luke, head still covered with the plastic garbage bag, was dressed in nothing but his briefs. He’d been rolled onto the cabin floor; his body lay on top of the duvet cover.

Trent grabbed two fifty-pound diving belts from their scuba gear and carried them up to the main deck. Roxy handed a twenty-five-pounder through the hatch. Trent ran back down, wrapped Luke’s body tightly in the blanket, and, with Roxy’s help, dragged his deadweight up the stairs and onto the aft deck behind the wheelhouse.

Trent pulled back the duvet and fastened one belt, cinched it tight around Luke’s waist, and then made short work of the second. He grabbed the twenty-five-pound belt, wrapped it twice around Luke’s neck, and secured it. Postmortem lividity had turned Luke’s back, buttocks, and legs a blackish-purple where the blood had settled.

Trent pulled the duvet taut, rolling Luke’s body over, and ripped a cut from top to bottom on the garbage bag so it would disengage after splashdown and be dragged out to sea. He worried it might fill with air as the corpse decomposed, and drag the body to the surface.

Roxy steeled herself as she looked down at Luke. His face was bone-white, his eyes devoid of color, just a thick opaque film. If there was one life lesson she had learned from her father, it was to meet trouble head-on. Never roll over, never look back, and never run. She swallowed her rising bile and choked, “Do it.”

Trent grabbed both ends of the blanket and muscled Luke’s body with 125 pounds of lead weights off the stern of the catamaran, tossing the duvet into the chop behind him.

Roxy and Trent stood shoulder to shoulder as they watched Luke float for a second and then slip below the water’s surface; they were confident he was permanently buried at sea and they could move forward with their plan. 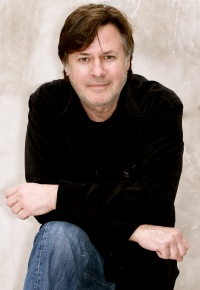 Best-selling author John Lansing started his career as an actor in New York City. He spent a year at the Royale Theatre performing the lead in the Broadway production of “Grease” before putting together a rock ‘n’ roll band and playing the iconic club CBGB.

Lansing closed up his Tribeca loft and headed for the West Coast where he landed a co-starring role in George Lucas’ “More American Graffiti,” and guest-starred on numerous television shows.

The Devil’s Necktie, his first Jack Bertolino novel, became a best seller on Barnes & Noble and hit #1 in Amazon’s Kindle store in the Crime Fiction genre.