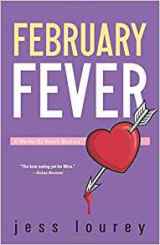 
February Fever finds librarian Mira James’s sizzling relationship with her boyfriend Johnny Leeson in jeopardy when Johnny gets a month long internship across the country. Because Jess is not wild about flying she figures the relationship will be on hold until Mrs. Berns comes to the rescue by suggesting the two of them travel cross-country via train. Sounds like a good idea until it turns out the train is a Valentine special for singles to meet. And then the train gets stuck in a snow storm. Those two things would be bad enough, but this is after all Mira and the series is called Murder by Month so of course Mira once again has a murder happen in her vicinity and Mira being Mira  is soon investigating.

Things to like about this book are that the main characters, or at least those on the trip, stay true to form. Once again, Ms. Lourey delivers a book that while very funny in some places isn’t quite your typical cozy. The plot is interesting, and while snowbound trains are not exactly new to the mystery genre, the author does it very well.

There are a couple of things about the series as a whole that rub me wrong. I hate the near slap stick comedy routines that show up throughout the series. In this book  Mira agrees to dance with a guy once, only one dance, but then trips and face plants into his crotch. This and things like it just add too much silliness to a book that doesn’t need it for laughs and in my opinion takes away from the good writing.

The other thing that I definitely did not like, nor I imagine will other readers who follow this series,

is that the author kills off one of the regular characters. I don’t want to spoil the book for readers, so I won’t say who or how, but this was a shocking development.

This is the tenth book in the series with March and April to go to finish the year of murders. Since this book came out in 2015, I’m not sure the series will wrap up or not. I hope so. In spite of a few quibbles, I enjoy visiting with Mira and the other characters.