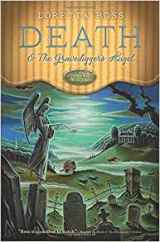 
This is a wonderful, amusing and emotionally fraught novel. Like most of us, the characters are quirky, odd, some with skewed views of their world. When murder visits their community, their reactions are often unpredictable.

Start with the lead protagonist, a private detective in the community of East Bledsoe Ferry, Missouri. His name is Death Bogart. Yes, he of the title line for this series. His brother, a paramedic, is Randy. Death’s girl friend is Wren Morgan who is employed by a local auction house.

Immediately, readers will understand that the names of the characters play almost as important roles in the narrative as do the humans to which the individuals are attached. The dialogue ranges from testy to heartfelt and at times, sarcastic, but always appropriate. Readers will quickly become familiar with the connections between the characters.

Wren Morgan is an auctioneer. Part of her job entails cataloging and organizing estates contracted for sale by her employer. She’s anxious to start work at the late nineteenth century and long abandoned Hadleigh estate. Her work is delayed because the body of a man clad in a stolen Civil War uniform has been discovered on the property. Death Bogart gets involved when he’s asked to investigate the circumstances of the murder. Then things get complicated.

There are other elements that further complicate Wren’s and Death’s life. One is the leader of an out-of-ordinary religious cult who often argues with biblical references. The pastor doesn’t actually quote the bible, he quotes the book, chapter and verse. In one hilarious scene, Wren’s brother looks up the barked references and relays them verbally to his sister.

Ultimately the crimes are solved but not before a terrifying experience menaces Wren and Death solves the case of the mysterious dancing can. A most enjoyable reading experience.

Reviewed by Carl Brookins, November 2017.
http://www.carlbrookins.com http://agora2.blogspot.com
The Case of the Purloined Painting, The Case of the Great Train Robbery, Reunion, Red Sky.