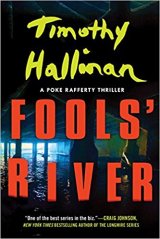 
The author writes in an afterword: “I had a vague idea when I started writing Fools’ River that it might be fun to bring together three or four simultaneous stories and see whether I could tell them all in a very compressed span…”  And so he did, relating several threads within 36 hours.

So we begin with Edward, the leading man in a play with Miaow, Poke Rafferty’s adopted daughter, begging Poke to find his father who is missing for 12 days; the travail of the father, one of a series of men lured by sex and imprisoned while his capturers milk bank accounts and credit cards; the life and times of Lutanh, a boy-girl, which permits descriptions of the seedier side of Thailand and its sex-obsessed trade; then there is Rose, former bar girl, married to Poke for seven years and now bearing his child in a difficult pregnancy, and mother of Miaow; and lastly Poke’s constant worry about Rose, while attempting to find Edward’s father.

The descriptions of the corruption of the Bangkok police is penetrating as are observations of the sex establishments: the Cherry Girls, the bars and of the farangs chasing after them.   Each of the sub-plots is fast-paced and absorbing and brings the reader along to a thrilling finish.