If you haven’t seen this video, well, you
just have to or your life won’t be complete 😉

END_OF_DOCUMENT_TOKEN_TO_BE_REPLACED 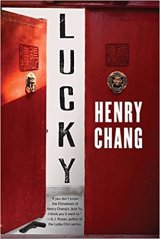 
The protagonist in this series, Jack Yu, is a Chinese detective.  The action centers in New York’s Chinatown.  The novels offer a brutal look into the poverty and violence, the gangsters and crime of the society.  The “Lucky” of the title is Jack’s boyhood friend, a Chinatown gang leader name Louie who was shot in a Chinatown OTB establishment and lay in a coma for 88 days, finally awakening on Easter Sunday.

Jack believes his blood brother friend has run out of luck, and tries to get him to enter the witness protection program.  But Lucky eschews Jack’s advice, and upon his recovery after leaving the hospital puts together a small crew in an attempt to regain his position as the crime boss of Chinatown.  He masterminds several daring operations against other crime bosses’ gambling dens or massage parlors, stealing large sums of money.  It is a race with one of two results.

Meanwhile Jack is called upon to perform his duties as a New York City cop, giving the author the means to describe the culture and people of Chinatown (and the satellite areas in Queens) , portraying the streets, buildings and environment as only a native can.  Henry Chang writes simple, hard prose, tightly plotted.