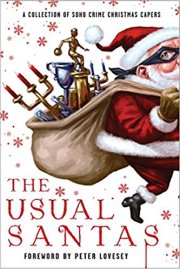 This captivating collection, which features bestselling and award-winning authors, contains laughs aplenty, the most hardboiled of holiday noir, and heartwarming  reminders of the spirit of the season.

Nine mall Santas must find the imposter among them. An elderly lady seeks peace from her murderously loud neighbors at Christmastime. A young woman receives a mysterious invitation to Christmas dinner with a stranger. Niccolò Machiavelli sets out to save an Italian city. Sherlock Holmes’s one-time nemesis Irene Adler finds herself in an unexpected tangle in Paris while on a routine espionage assignment. Jane Austen searches for the Dowager Duchess of Wilborough’s stolen diamonds. These and other adventures in this delectable volume will whisk readers away to Christmases around the globe, from a Korean War POW camp to a Copenhagen refugee squat, from a palatial hotel in 1920s Bombay to a crumbling mansion in Havana.

Short stories are not my usual cuppa but, for some reason, I feel differently about it during the Christmas season. Maybe their brevity appeals to me because I’m so busy with other things at this time of year and like to sandwich in a story here and there, more satisfying than just a chapter or two of a full-length novel.

Christmasy short stories can be a lot of fun and those included in The Usual Santas certainly are but some of them are definitely darker and they take place around the world (as might be expected from authors from Soho Press which focuses largely on non-American work). And what a terrific group of authors these 18 are!

From Timothy Hallinan comes a story about Chalee, a street kid in Bangkok who draws a special picture for a younger child and Stephanie Barron takes us back to 1804 Bath, England, telling the tale of sleuth Jane Austen who has been invited to join Lord Harold Trowbridge’s family as they celebrate New Year’s Eve, not anticipating that she’ll become involved in the theft of a magnificent necklace. Mette Ivie Harrison offers a look at a Mormon community just before Christmas when two families’ sons are about to go out on their missions while Peter Lovesey has Fran and Jim Palmer going on a small adventure—supper with the unknown Miss Shivers—where Fran learns a secret from her past, a secret that is overshadowed by an encounter with a very special young man.

Those are just a sample of the gems in The Usual Santas and I highly recommend this anthology to anyone with a fondness for Christmas tales.

I’d love to send somebody my very
gently used print advance reading
copy of The Usual Santas. Leave a
comment below and I’ll draw the
winning name on Wednesday evening,
December 20th. This drawing is open
to residents of the US & Canada.