Lauren Carr is the best-selling author of the Mac Faraday Mysteries, which takes place in Deep Creek Lake, Maryland. Killer in the Band is the third installment in the Lovers in Crime Mystery series.

In addition to her series set in the northern panhandle of West Virginia, Lauren Carr has also written the Mac Faraday Mysteries, set on Deep Creek Lake in western Maryland, and the Thorny Rose Mysteries, set in Washington DC. The second installment in the Thorny Rose Mysteries, which features Joshua Thornton’s son Murphy and Jessica Faraday, Mac’s daughter, A Fine Year for Murder, was released in January 2017. The next book, Twofer Murder, was recently released.

She lives with her husband, son, and four dogs on a mountain in Harpers Ferry, WV. Visit Lauren Carr’s website at http://www.mysterylady.net to learn more about Lauren and her upcoming mysteries.

When you get too old to learn new things, then you’re old. That’s why I am always open to learning new things. I don’t want to be old.

My most recent discovery: Editors are like hair stylists.

When you find a good one, never let him or her go. If forced to choose—keep your editor and divorce your spouse. My mother used to say men are like buses. Another one will come by in ten minutes. Good hair stylists whose touch makes your hair quiver and give in to their every demand—not so frequent.

It’s the same with editors who know just what to fix in your writing to make it sing to the reader.

I lost the editor I have used for several of my last books to a big publisher, who made her sign an exclusivity agreement. Since then, I’ve been having flashbacks to when I moved from the northern panhandle of West Virginia to Washington—leaving my first hair stylist behind.

Leslie found me wandering aimlessly into her shop after having been used and abused by another hairdresser who thought he could toy with my locks. Up until then, I confess, I played around—roaming from salon to salon—looking for style in all the wrong places. I was so young and naïve. Every time a stylist would whisper sweet nothings in my ear, promising to give me a look that would turn other women green with envy—I’d believe them.

After so many bad haircuts—I became hardened and cynical—believing that I had a head of hair that only a mother could love.

I still remember that last session I had with Leslie. It was raining—just like a scene in the movies—when I told Leslie that I was leaving—I cried bitter tears of heartache and swore that I’d never forget her. Still, to this day, I remember the look in her eyes when she said to me, “Do you want hair spray?”

God got me for leaving Leslie high and dry like that. I suffered the shame of bad haircuts for five long miserable years.

When my editor left me, I once again felt that sense of loss. Whatever shall I do? Wherever shall I go?

To which she replied, “Frankly, my dear, I don’t give a damn. They’re giving me full benefits, including a 401K and healthcare.”

I bit on my knuckle and collapsed to the floor.

When the edited manuscript for Twofer Murder came back from my new editor, I once again suffered horrible memories of when those cheap stylists had their way with my hair—leaving it dry, with all the life sucked out of it.

Tears came to my eyes as I stroked the screen of my laptop, whispering comforting words to my book. “That’s okay. I still love you. We’ll get this mess sorted out. This horrid experience will be nothing but a distant memory—eventually.” 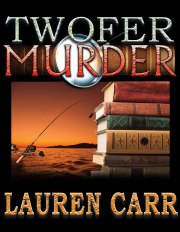 Once again, I was out there— wishin’ and hopin’ and thinkin’ and prayin’. Plannin’ and dreamin’—that Santa Claus will bring me an editor for Christmas.

Note: Before everyone sends me names of their editors, I do have a new one lined up for ICE. But, keep me in mind if this relationship doesn’t work out.

To enter the drawing for an
ebook copy of Twofer Murder by
Lauren Carr, just leave a comment
below with your hair dressing horror
tale
. The winning name will be drawn
on Tuesday evening, December 19th.

3 thoughts on “How Editors Are Like Hair Stylists—and a Giveaway!”