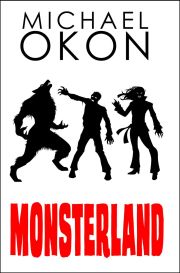 Welcome to Monsterland, the scariest place on earth.

When world markets are decimated by a crippling plague, philanthropist, and billionaire businessman, Vincent Konrad decides to place monsters in a theme park setting to promote education and tolerance. Copper Valley is chosen as the primary site for the park in the United States.

Wyatt Baldwin, a high school senior is dying to go to the opening and when he lands special passes to the park, he and his friends are expecting the experience of a lifetime. After all, in a theme park where real zombies, werewolves, and vampires are the main attractions, what could possibly go wrong?

An amusement park focused on some of the things that go bump in the night sounds really cool, doesn’t it? Well, maybe not so much for a horror house coward like me but I do like reading about such things at a safe distance 😉

A high school senior is a prime customer for Monsterland, the new park opened up by philanthropist Vincent Konrad, ostensibly for altruistic reasons but, of course, we know differently. Since people in this world are aware that zombies, werewolves and vampires exist, a theme park like this one should be kind of like a zoo, meant to protect these endangered species, but also an exciting way to interact with the monsters. So Wyatt and his friends think but they’re about to discover their expectations are off base, way off base, especially when they realize what constitutes a true monster.

In a tale that builds on its high level of tension, mixed with a good bit of adventure and gore, not to mention some teenaged romance, Michael Okon takes Wyatt, and us, down a path of horror that’s much more real than anyone ever expected. The result is a story that gripped me by the throat and just would not let go, a most satisfactory way to spend a few hours. 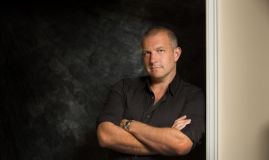 Michael Okon is an award-winning and best-selling author of multiple genres including paranormal, thriller, horror, action/adventure and self-help. He graduated from Long Island University with a degree in English, and then later received his MBA in business and finance. Coming from a family of writers, he has storytelling in his DNA. Michael has been writing from as far back as he can remember, his inspiration being his love for films and their impact on his life. From the time he saw The Goonies, he was hooked on the idea of entertaining people through unforgettable characters.

Michael is a lifelong movie buff, a music playlist aficionado, and a sucker for self-help books. He lives on the North Shore of Long Island with his wife and children.