The AM13 Outbreak has affected everywhere, the entire world has experienced infection.

Victims of the virus are no longer human, they’ve changed, become something scientifically impossible. With their loss of human function and their new lust for flesh, there’s only one word to describe them…

The world is divided as everyone tries to work out how to survive. Many have already lost their lives
in the fight, but there are still a few who are not dead…

This book is a little different from many because each chapter brings us a new scenario with new characters. In some ways, that’s good since we get to see how people around the world cope with what has become a full-scale zombie apocalypse. On the other hand, it means I couldn’t make any real connection with any of them.

In another departure from the norm, each protagonist reacts in different ways, some of which really got my attention, like the one who’s actually devolving into a zombie after being bitten. One character has a perhaps hopeless belief that she can find her way back to a loved one through hundreds of miles of devastation and zombies; another is a bit of a warrior who’s flummoxed when he comes across a pregnant woman.

A lot of the author’s attention is on other things going on with the characters besides the virus and I did appreciate that but, when all is said and done, this book left me a little dissatisfied because each chapter ends with no resolution and I really wanted to know what happened to each person. The ending, though, came in proper zombie fashion so, all in all, I enjoyed Not Dead Yet with some reservations. 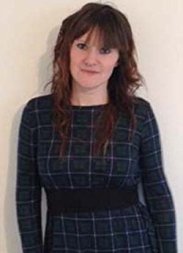 Samie Sands is a 28 year old freelance graphic designer who has recently decided to follow her lifelong dream and use her creativity in a new way by writing.

She has a degree in Media Studies and PR and has already had articles published in a number of e-zines, including one of the most popular pieces at Zombie Guide Magazine. She has also had short stories included in a number of successful projects.

She lives in a small seaside town in the UK, but loves to travel to gain inspiration from new places and different cultures.

2 thoughts on “Book Review: Not Dead Yet by Samie Sands”