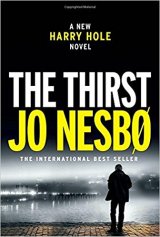 Harry Hole, Norway’s most experienced serial murder detective, is content to no longer serve on the murder squad, instead lecturing at the police college and living happily after marrying Rakel three years ago.  Unfortunately, such bliss is interrupted when evidence of a possible murder too difficult to solve leads the police chief to blackmail Harry into joining the hunt.  And then he jumps in with both feet.

It turns out that the villain in a previous novel in the series, Police, may be the sought-after culprit, especially when Harry recognizes the killer’s MO.  As the frustrating hunt continues, we learn more about vampirism than, perhaps, we’d like.  It appears that the murderer has a taste for drinking the victim’s blood.  And Nesbo delves into the subject deeply and often.

In this, the 11th Harry Hole novel, the author once again demonstrates why the series is so popular:  a plot so well-developed that the reader hardly notices the length of the book.  And the twist that draws the tale to an end certainly is an added fillip.  The Thirst demonstrates to what lengths Harry Hole will go to solve a case.

This is Book #15 in the Charlie Parker series.  In it, Charlie has made a deal with Special Agent Ross and is on retainer to the FBI, and he is asked to find a private investigator, Jacob Eklund, also working for Ross, who apparently has disappeared.  With few facts, especially what the PI was doing for Ross, Parker begins his investigation.  And it leads him into the weirdest of investigations. It seems Eklund, on his own, was involved in tracking down a series of homicides and disappearances, each linked to extraordinary events or sightings.

Meanwhile, Parker is also facing pressure from Rachel, his onetime girlfriend and mother of his daughter, Sam; she is convinced Sam’s exposure to Parker places her in jeopardy.  This belief, reinforced by Sam’s abduction in a previous novel and possible harm, leads Rachel to seek judicial relief preventing direct contact between Parker and his daughter without direct supervision.

As the author acknowledges: “This odd book—if mine are not all odd books—is as much a product of a lifetime of reading ghost stories…”  And it is odd.  And it is filled with ghost stories.  It is an intriguing tale of the supernatural, together with a basic crime story.  It is one fascinating account and well-plotted, bringing together what amounts to a detective story and a ghost story, and it is recommended.

2 thoughts on “Book Reviews: The Thirst by Jo Nesbo and A Game of Ghosts by John Connolly”