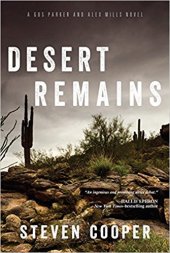 
There’s a serial killer on the loose around Phoenix. All the victims are young women. All are tortured before death. All, inexplicably, have paintings on the rocks around where the bodies are dumped (usually in caves) depicting the manner of death. The murder sites provide no clues, otherwise. The killer is evidently up to snuff regarding crime scene detection. Detective Alex Mills is under the gun to solve these crimes quickly, but he’s also under pressure by another detective, former FBI agent Timothy Chase, who’d just love to have Mills’ job.

This is when Mills asks “intuitive medium,” that’s a psychic to most of us, Gus Parker to lend a hand. Parker’s messages from beyond the pale have helped Mills solve crimes before, but this time, even the psychic is hard-pressed to read the messages left behind.

I don’t usually read serial killer books. I guess I prefer my murders to be one-on-one for a reason other than pure evil. And I don’t usually like books written in present tense. Those things said, now forget about them. The book is tense and exciting, a real page turner. The characterization is excellent for all the main characters and most of the more minor ones. Gus, with his dog Ivy, hit a real chord with me. Situations that could’ve made this character run-of-the-mill are absent, a wonderful surprise. The dialogue is clean and carries the story forward. I wouldn’t hesitate to recommend Desert Remains to any mystery reader, and most especially if you like a little woo-woo in your stories. And I do.

To enter the drawing for a print copy
of Desert Remains by Steven Cooper,
leave a comment below. One winning
name will be drawn Tuesday evening,
October 17th. This drawing is open
to residents of the US and Canada.