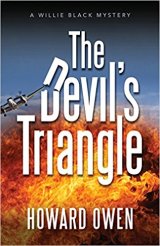 
The eponymous area of Richmond, Virginia had had an unsavory reputation, although not so much in recent years. The opening lines of the book are quite attention-getting:  “In the flaming hell that used to be one of my watering holes, last call came about eight hours early.  You don’t really expect a twin-engine Beechcraft to crash through the plate-glass window during happy hour.”

The author doesn’t really lose that initial grab of the reader’s attention through the remainder of the book, with tight plotting and wonderful writing, complete with sympathetic main characters, especially the protagonist, one Willie Black, a newspaperman of mixed race in a dying profession, one of many in a “dystopian march to obsolescence marked by layoffs, furloughs, and shortened hours.”    We are told that more “staples of twenty-first century print journalism are on the way.”  We meet Mal “Wheelie” Wheelwright, the editor, and the “print journalists” of which Willie is one.  Willie says they “have to be like sharks. Keep moving or die. Either take a promotion or move to a bigger paper. . . At fifty-six, you want to be the SOB, not the person who works for SOBs. You aren’t likely to fire yourself.”  Especially so for those in the “Fatal Fifties – – too young to retire, too old to outwork or underbid the damn millennials and their younger siblings.”

There is initially the suspicion that the “tragic air disaster in Richmond” was the work of foreign terrorists.  The reporters on The Triangle go to the scene of the crime, where Willie finds Larry Doby Jones, the chief of police, standing “half a block from the carnage.”  Of course, TV reporters were there en masse, as were print journalists from every paper from the Washington Post on down.  We soon meet Willie’s family:  His mother Peggy, 74, whose significant other is referred to simply as “Awesome Dude;” his daughter Andi, and grandson, William, typically, it would seem, a young boy born out of wedlock, as is Willie himself.  Willie is renting a place from his third ex-wife, Kate, and lives there with his current romantic attachment, Cindy.

From the publisher:  The obvious answers, though, just don’t pan out.  All the shoot-from-the-hip purveyors of vigilante justice have to stand down when it becomes clear that the pilot of the suicide plane was a disaffected former Richmonder, David Biggio, with no known links to any terrorist organizations, foreign or domestic.  For Willie Black, the daily newspaper’s hard-charging, hard-drinking night cops reporter, the question still remains:  Why?

The story soon seems apparent:  “Crazy guy gets crazier when his wife leaves him and takes his only child.  He steals a plane and makes some kind of cataclysmic statement a few blocks from where his former family lives.”  The number of dead reaches 25.  The tale follows Willie’s investigation and its culmination, where every loose end is neatly tied up.   This is the author’s fifteenth novel, and the sixth in the Willie Black series.  It is really a page-turner, and I can’t wait for the next in the series. Highly recommended.