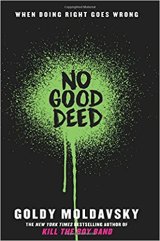 Imagine Carl Hiaasen collaborating with Alan Sherman and you’d be on your way to understanding this book. Gregor Maravilla met his idol, Robert Drill, at a book signing when he was fourteen. The tech guru and philanthropist’s words inspired him to come up with a way to save the world. He settled on feeding all the hungry kids. He’s also read Drill’s autobiography nine times. Sandwiched between a nerdy and really rude older brother who plays Minecraft constantly and is raking in bucks from ads accompanying videos of him doing so online and a younger sister who’s a perfect speller, Gregor’s desperate to find his own niche

When he learned that Robert Drill is sponsoring a summer camp for humanitarian teen activists, he applies, expecting to be turned down because the competition is intense. Surprise! He’s selected and even the humiliation heaped upon him by his brother, sister, parents and grandfather on the ride to camp in upstate New York can’t completely dampen his enthusiasm.

His growing awareness that all is not as it seems, begins when he starts meeting the other campers and starts him not only down a road of introspection, but one of gradual cynicism about his plans for saving the world. Everyone there has a cause, including teen movie star Ashley Woodstone (imagine Luna Lovegood channeling some of the ditzier heroines in 1980s Rom-Coms), whose thing is convincing everyone to eat dirt. Add in a men’s rights activist, a boycott camp activist, a teen artist who can’t speak a word of English, an anti Styrofoam activist and dozens more who are equally oddball and you have the recipe for a perfect storm of sniping, backstabbing and cutthroat competition.

While the party line is that everyone’s there to promote a better world, the realization that there are various types of competitions to earn points toward an internship to be awarded to the camper with the highest total, turns any hope of cooperation into a free for all. Gregor’s constant insecurity and self-doubt put him in the fish out of water category, so much so that every time he opens his mouth, he’s nibbling his own toes.

Despite his attempts to avoid Ashley, they seem to be thrown together at every turn and as the summer insanity progresses, their conversations become the sanest part of his day. It takes a virtual war between the guys and gals at the final competition, a frightening experience involving Ashley and some hard looking in the mirror for Gregor to realize what’s truly important, not only in terms of saving the world, but in terms of how he sees others.

This is a funny and wacky story, but make no mistake, under all the goofiness beats a very strong heart.