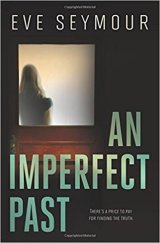 
Kim Slate is a psychologist/psycho-therapist in Cheltenham. She has apparently had some serious troubles in the past, losing her lover to violent death and being under suspicion. The incident has left Kim with a general suspicion of authority and law enforcement specifically. This complicates an already fraught situation.

One of her former patients, a young woman named Mimi, beset by an invidious eating disorder and a mother who also needs some family therapy, returns at fourteen to Ellerslie Lodge, the clinic serving anorexia-afflicted young women. Mimi, dying, tasks Kim with finding her long-lost brother. Mimi’s mother, a hard-driving successful business woman, entangled with a lover twenty years her junior, is in deep denial about her son. When the lover is discovered dead of a knife wound and expertly eviscerated, police naturally question Kim and look closely at a champion chef with whom Kim Slate has had a casual relationship.

There are even more complications as Kim sets out to avoid the police inquiry and attempt to track down Mimi’s long-lost brother. The novel is driven by people with night terrors brought flailing into the harsh light of day. Kim struggles to retain her sanity, manage clients in the clinic and complete her efforts to locate Mimi’s brother.

Several surprising events occur along the way to keep readers glued to the pages of this dark and well-written novel. In some ways, it is depressing to realize there are a great number of similarly afflicted individuals roaming about our landscape and interfering with our attempts to manage our own daily lives. This thoughtful, complicated story does not foster joy and laughter but it does explore a number of troubling aspects of our complicated lives.

Reviewed by Carl Brookins, August 2017.
http://www.carlbrookins.com http://agora2.blogspot.com
The Case of the Purloined Painting, The Case of the Great Train Robbery, Reunion, Red Sky.