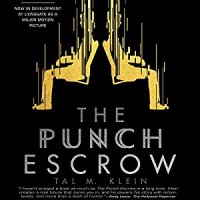 It’s the year 2147. Advancements in nanotechnology have enabled us to control aging. We’ve genetically engineered mosquitoes to feast on carbon fumes instead of blood, ending air pollution. And teleportation has become the ideal mode of transportation, offered exclusively by International Transport—a secretive firm headquartered in New York City. Their slogan: Departure… Arrival… Delight!

Now Joel must outsmart the shadowy organization that controls teleportation, outrun the religious sect out to destroy it, and find a way to get back to the woman he loves in a world that now has two of him.

If you like a blend of science fiction and mystery, The Punch Escrow just might be for you. I do happen to like these crossgenres and, although there were a few blips along the way, I think both the author and the narrator had great fun with it which meant I did, too.

While the year is 2147 and there have been many scientific discoveries, you and I would feel perfectly comfortable in this future world. People are much the same and society hasn’t changed all that much either what with marital issues, video games, vacations, love of pop culture from the old times (remember Culture Club and Boy George?) and the occasional terrorist act. On the other hand, those mosquitoes mentioned above poop pollution on everybody willynilly.

Joel and his wife, Sylvia, have planned a vacation, a re-do of their honeymoon, in Costa Rica in hopes of jumpstarting their marriage but through a series of mishaps and a terrorist bomb, Sylvia has successfully teleported from New York City to Costa Rica but Joel did not and a decision she made has caused a problem…a real problem. Before too long, it becomes obvious that Joel is going to have to solve that problem and a few others to reunite with Sylvia.

This book is a lot of fun and Matthew Mercer, the narrator, is a big reason for my enjoyment. He has a voice that’s perfectly suited to the quirky Joel and he really did make the guy three-dimensional, if  you will. Mr. Klein has created a world that  is most unusual and, yet, familiar in many ways and Mr. Mercer brought it to life. I want more!

Tal M. Klein was born in Israel, grew up in New York, and currently lives in Detroit with his wife and two daughters. When she was five years old, his daughter Iris wrote a book called I’m a Bunch of Dinosaurs that went on to become one of the most successful children’s book projects on Kickstarter ―something that Tal explained to Iris by telling her, “your book made lots of kids happy.” Iris then asked Tal, “Daddy, why don’t you write a book that makes lots of grownups happy?” Tal mulled this over for a few years, and eventually wrote his first book, The Punch Escrow. It won the Inkshares Geek & Sundry Hard Science Fiction publishing contest, and is the first book published on the Geek & Sundry imprint. 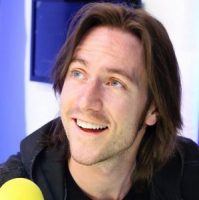 Matthew Christopher Miller, known professionally as Matthew Mercer or Matt Mercer, is an American voice actor involved in English dubs of Japanese anime as well as cartoons, films and video games. In anime shows, he voiced Levi in “Attack on Titan”, Kiritsugu Emiya in “Fate/Zero”, Kanji Tatsumi for episodes 13-26 in “Persona 4: The Animation” and Trafalgar Law in the “Funimation dub of One Piece”. In video games, he voices Leon S. Kennedy in the “Resident Evil” series, Jack Cooper in “Titanfall 2”, Chrom in “Fire Emblem Awakening”, McCree in “Overwatch”, MacCready in “Fallout 4” and Yusuke Kitagawa in “Persona 5”. In addition to voice-over, Mercer has developed some live-action web series including a Nintendo character parody called “There Will Be Brawl” and the famous Geek & Sundry and Alpha Dungeons & Dragons gaming session show “Critical Role.” The Punch Escrow is his first audiobook.

“One part adventure journal, one part letter from the future… It’s
a clever way to explore this brave new world. Darting between
The Bourne Identity and Blade Runner , The Punch Escrow travels
through time to unwind the global conspiracy theory. Klein has
written a quick-witted, self-aware thriller that is addictive and fun.”
—Foreword Reviews (starred review)

The giveaway is for The Punch Escrow Prize Pack.
Open to Continental US Only

Who isn’t interested in Alchemy? Can there be anything more intriguing than the ability to transform one thing into something completely different? Lead into gold is probably the conversion of matter most people know of–not that in reality anyone has ever succeeded. But close to that is the search for an elixir to make a living person immortal. And there begins the story.

Zoe Faust, who is 340 years old but appears 30ish, has found the way to transform her own life while keeping her age secret. She moves frequently when her lack of aging becomes too obvious. She states she’s a granddaughter of the original Zoe. And now she’s on a quest to preserve her friend, Dorian Robert-Houdin, a gargoyle who came to life, from turning back to stone. Zoe travels to France, where she once lived, to discover someone from her past, an old lady who says that as a child, she knew Zoe. She also tells Zoe that the police want her for the murder, during WWII, of the man who ran Zoe’s shop and was burned beyond recognition when the shop fell victim to arson.

Zoe flees, which lands her in a peck of trouble when more people from her past follow her to her home–and right to Dorian. These people expect her to provide an old book they believe will show them the way to make the elixir of life–except the elixir needs the sacrifice of a living person. Who will they chose to be this sacrifice? That’s what Zoe has to find out  and prevent. Complicating all she does is the relationship she has with a lover, a partner after more than one hundred years. If he finds out what she really is, what will happen?

This is a good plot. I greatly enjoyed Dorian (although his “brother” not so much) and most of the rest of the cast are good, too. Given her great age, sometimes Zoe struck me as insipid. Well, maybe because of her great age, yes? Some passages are quite repetitive, as well, but overall, I did enjoy the book.

As for alchemy, Dorian is a marvelous cook. He’s found a way to transform common vegan ingredients into wonderful meals. His greatest discovery? Avocado! The book contains the recipe for his special chocolate mousse, which I actually made and found it pretty darn good!