It’s a book to lose yourself in as you enter a world of smuggling,
chocolate, adventure and love in the 1820s. —Portobello Book Blog

Celebrated writer and historian Maria Graham must make
the treacherous voyage from Brazil to London to deliver her
latest book to her publisher. Having come to terms with the
loss of her beloved husband, Maria now has renewed hope
for the future and is determined to live her life as she pleases,
free from the smothering constraints of Georgian society.

For a woman travelling alone it’s a journey fraught with danger,
and as civil war rages around her, the only ship prepared to take Maria
belongs to roguish smuggler Captain James Henderson. Onboard,
all is well until Maria makes two shocking discoveries – the first a deadly
secret, the second an irresistible attraction to the enigmatic captain.

With Henderson on a journey of his own and determined to finally
put his life of crime behind him, he and Maria grow ever closer. But
can Henderson escape his illicit past or will the scandalous
secret he’s hiding ruin them both?

On Starlit Seas is a breathtaking and compelling
story of passion, secrets and escape.

Sheridan binds together social comment, romance on the
high seas, pursuit by excisemen, knife-wielding toerags in
the stench of 19th-century London and the consumption of
so much hot chocolate that the pages seem impregnated
with its heady aroma. It all makes On Starlit Seas a pleasure
to consume, and not even a guilty one. —The Herald 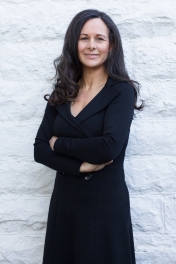 Sara Sheridan is the author of Brighton Belle, England Expects, and London Calling. She is a cultural commentator who appears regularly on television and radio. In 2014 she was named one of the Saltire Society’s 365 Most Influential Scottish Women, past and present.

It’s a book to lose yourself in as you enter a world of smuggling,
chocolate, adventure and love in the 1820s. —Portobello Book Blog