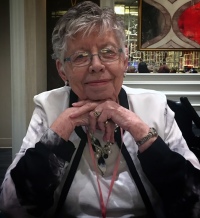 Marilyn Meredith’s published book count is nearing 40. She is one of the founding members of the San Joaquin chapter of Sister in Crime. She taught writing for Writers Digest Schools for 10 years, and was an instructor at the prestigious Maui Writers Retreat, and has taught at many writers’ conferences. Marilyn is a member of three chapters of Sisters in Crime, Mystery Writers of America, and serves on the board of the Public Safety Writers of America. She lives in the foothills of the Sierra, a place with many similarities to Tempe Crabtree’s patrol area. Webpage:  http://fictionforyou.com Blog:  http://marilymeredith.blogspot.com/ and you can follow her on Facebook.

Before I get started, let me state that though I’ve bumped off a bunch of fictional folks in my books, I’ve never killed a main character. Nor have I ever considered it.

I’ve read books where on-going and important characters to the hero or heroine have been killed one way or another. In one, the character’s love interest was killed but miraculously returned in the next book. To me it was unbelievable because of the way he’d died. In a series I love, the wife of the hero dies. Heart wrenching, but it made for much angst on the part of the hero and some intriguing new twists in the following books. I don’t know whether I could do that.

I’ve had a couple of readers tell me to kill off Tempe’s husband, Hutch, because he’s too “straight-laced.” Well, after all, he is a pastor. Besides, because of his strong Christian beliefs, at times there has been conflict because Tempe has used various forms of Indian mysticism to help her solve crimes. Because Tempe and Hutch love and support one another, some conflict adds to the fun of writing for me as the writer.

Because I’ve said all that, who knows what might happen in the future? I never quite know what these characters I’ve had floating around in my mind for such a long time might have happen until I actually start writing about them again.

Recently, I had a friend ask how I remember what has happened in the past. To be honest, sometimes I have to go look back at a book to refresh my memory. But as far as how Tempe or Hutch might react to something, I have no problem knowing what each one might do. I’ve been hanging out with these two for so long, I even know how they think.

But as for killing off a main character, I have no plans to do that at the moment.

What do you writers and readers think about this? 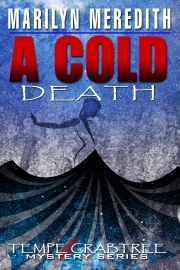 Deputy Tempe Crabtree and her husband answer the call for help with unruly guests visiting a closed summer camp during a huge snow storm and are trapped there along with the others. One is a murderer.

Anyone who orders any of my books from the publisher‘s website: http://mundania.com can get 10% off by entering MP20 coupon code in the shopping cart. This is good all the time for all my books, E-books and print books.

You can order books from many sources:

Contest: Once again I’m going to use the name of the person who comments on the most blogs on my tour for the next Deputy Tempe Crabtree mystery—which may be the last in the series.

Tomorrow I’ll be here: www.sharonarthurmoore.blogspot.com with Deputy Tempe Crabtree and the Food She Eats