Once again, big surprise, I find myself with
an overload of books read but not yet reviewed
so I think it’s time for a roundup or two… 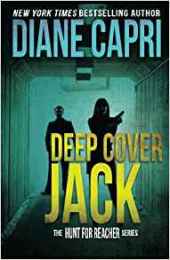 If you’ve never tried any of the Jack Reacher books by Lee Child, you need to read at least one before you tackle this series because this is all about the “other side” of the equation, the law enforcement folks who think they need to apprehend Reacher because he’s such a horrible person, a desperately wanted man. Well…our FBI Special Agents, Kim Otto and Carlos Gaspar have learned a few things by the time we get to this seventh book and they’ve picked up a little help along the way from other interested parties but they haven’t yet caught the man. Will they this time when they head for Houston? Hmm…if you know Jack, you know their chances are on the slim side but will they at least get close?

This is an intriguing, entertaining companion to the Jack Reacher series and, yes, Lee Child himself speaks highly of it. Oh, and before you think these must be the most incompetent agents ever if they’ve been chasing him through seven books, think again. Try it, you’ll like it 😉 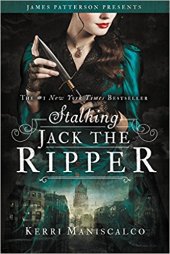 As you might surmise from the name of the publisher, this is “presented” by the megawatt author James Patterson himself and, if I do say so, this is a good ‘un. Audrey Rose Wadsworth loves to spend time in her uncle’s lab learning medical stuff but gets drawn into a serious criminal investigation, that of the gory deaths of some women of ill repute. With the assistance of Thomas Cresswell, apprentice to her uncle, Audrey Rose really wants to get justice for these poor women as well as bring a killer to justice but the stakes get even higher when the long arm of the law reaches out to someone close to her.

I like the Victorian era, young adult mysteries and the Jack the Ripper case (plus I love the cover) so trying this was a no brainer for me. Mounting clues and hair-raising theories lead to a horrifying discovery but, throughout it all, Audrey Rose maintains her intelligent, thoughtful focus even if she can’t be completely objective. The next case for this young lady and the charming if annoying Thomas, Hunting Prince Dracula, involves another string of killings while Audrey Rose studies forensic medicine in Romania and I can hardly wait to dive in. 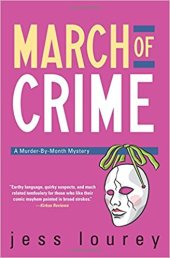 This cozy series has been fun and frothy since the beginning and I continue to like them a lot, especially because they never seem to get stale, if you know what I mean. They have plenty of humor along with tension and Mira Ross might as well be called the Jessica Fletcher of Battle Lake, Minnesota, since people seem to drop like flies in her vicinity. No wonder this mild-mannered librarian has aspirations of being a private eye!

One thing that intrigues me about cozies is the myriad ways authors find to present a dead body without offending sensibilities and I think Ms. Lourey has outdone herself and everyone else this time. Lifesize dolls are kind of creepy anyway (to me at least) but when one turns out to be an actual corpse sitting proudly right next to Mira, well I ask you, how could she NOT want to snoop? Mira and her assorted crew of cronies and nemeses are soon hot on one trail or another and I chortled all the way to the end. 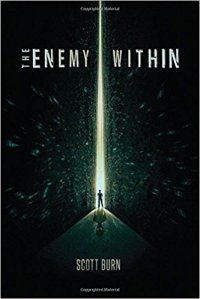 There have been people throughout history who have had visions of the future, some believable, many more not so much, but I had to have a lot of sympathy for the 17-year-old Max who has been seeing hellfire and damnation at the apparent end of the world. In his situation, I’m not sure I wouldn’t at least consider his way of ending these horrific sights that just won’t stop but one thing that would prevent me from  doing such a drastic thing is my own suspicion that I’d bungle it. And he does, landing himself in an institution.

Three other boys have found each other but know that they’re missing one and can’t do what they’re supposed to do without him. Who are they? Suffice it to say, there’s a new unclaimed satellite in orbit and things are about to get very unsettling for us and for our survival on this planet.

This was such a fun story with aliens and other cool science fiction-y stuff. Technically speaking, this is Young Adult but I recommend it to anyone who enjoys a good apocalyptic story full of adventure and mayhem, not to mention some pretty appealing characters. I hope we’ll see more of Max before too long. 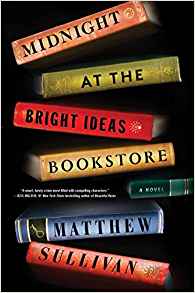 As a former bookstore owner, I naturally had to read this and, while I enjoyed it, I also had some reservations. The Bright Ideas Bookstore is a strange sort of place, attracting some rather odd people called the BookFrogs, some of whom seem to spend all their waking hours just hanging out, rarely buying anything. And, since Lydia Smith was Joey Molina’s favorite bookseller, you have to wonder why he would commit suicide in the bookstore, leaving his supposed favorite to find him.

But so he does and he leaves all his worldly goods to Lydia leading her to puzzle over certain things that pique her curiosity, not only because she thought Joey was a nice young man but also because she seems to have an odd connection to this mystery, a connection that takes her back to a most unpleasant murder-tainted past.

The ebook of Midnight at the Bright Ideas Bookstore grabbed my attention despite my initial reluctance and I decided I wanted to try listening to the tale. Narrator Madeleine Maby has a pleasing tone with identifiable vocalizations and I do think the audio edition helped evoke emotions a bit more easily than the written version. Bottomline, while the rampant dysfunction in these characters’ lives made me somewhat unsettled, the mystery itself was engaging.