Kathleen Delaney, author of Murder Half-Baked and other books, retired from real estate to pursue writing full time. She’s here today to talk about the importance of critters in her life.

Murder by Syllabub, fifth in the Ellen McKenzie series, is available in bookstores now. Purebred Dead, the first in the new Mary McGill series, was released in August 2015 and Curtains for Miss Plym was released in April 2016. Blood Red, White and Blue was released in July 2017.

I really can’t remember a time when I didn’t have at least one dog. Or one cat. Actually, the cat came first. I found her under a bush, a small starving kitten, when I was in…3rd grade? Something like that. We lived in an apartment and couldn’t have a dog, but after a lot of persuasion (I think it involved tears) the cat stayed until she died, and she had a long life.

Penny, the Irish Setter, came next. She was also abused. By this time my folks had bought our first house and kept their promise to my brother and I that we could have a dog. We finally decided on an Irish Setter and combed through the ads in the LA Times for weeks before we finally went to see one of the few Irish Setters we could afford. She was a scrawny filthy dog with a scab on the end of her tail and a choke chain for a collar that had rubbed all the hair off her neck. My mother was appalled, both at the condition of the dog, and I’m sure at the thought of the vet bills in her future, but not one of us was willing to leave without her. Penny was a wonderful dog, after she got full, and also lived a long life. 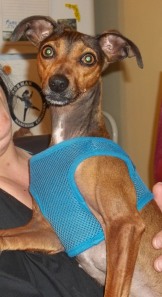 I’ve been blessed to live with a lot of wonderful dogs, and cats, and they’ve made me laugh, want to kill them for tearing up stuff both inside my house and out, and have filled my life with love and devotion. The cats not so much on the devotion thing, but they’ve made it clear they like where they live, after, of course, they got me trained. They’ve all made me a better person.

So, when it was time to write a new series which became the Mary McGill canine mysteries, dogs crept in. It wasn’t as if animals hadn’t been prominently featured in the Ellen McKenzie mysteries, but they’d never taken over. This time they did.

I hadn’t started out to write a dog centered series but dogs I had lived with kept showing up and showed no intention of leaving. They didn’t, either. Like people, all dogs aren’t the same. Some are shy, (I had one of the world’s shyest dogs and probably one of the most neurotic but I loved her dearly) some are friendly to a fault. Some delight in being obedient and wanting to please, others seem to have taken Rhett Butler’s parting line to heart and really don’t ‘give a damn.’

Mary McGill had never had a dog until I gave her Millie, in Purebred Dead. Millie’s owner had been brutally murdered and she needed someone, badly. That someone turned out to be Mary. However, as it is in real life, things don’t always go smoothly. Mary’s Millie likes to chew on things. So does mine. It was the destruction of my sofa pillows by my own Millie that I got the idea for Mary McGill’s Millie to rip up what she thought was a toy only to reveal a vital clue in Curtains for Miss Plym. Ranger, a homeless German Shepherd who appeared in Blood Red White and Blue, was loosely based on Shea, one of my German Shepherds. Shea never met a person she didn’t like, especially if that person was under 4 ft tall. She was smart, loving, kind, protective, and great at herding the grandkids into a corner when they were toddlers. They’d scream and she’d look at me with a doggy grin as if to say, See? Saved them again. Dogs can be very expressive.

I no longer live on acreage. The horses are gone, so are the 4 H animals. Dogs don’t come with me to book signings and I’ve decided driving cross country with no one but dogs to keep me company is not in my future. My house is one of the smallest I’ve lived in for years and the yard is postage sized compared to others I’ve had, but I love it. So do the current two dogs and so does the cat. The dogs are fairly young but the cat must be going on 18 and spends a lot of time asleep, a large part of it on my lap while I’m trying to type. Tree climbing and fence walking are in her past. The dogs are small and don’t seem to mind having a small yard. They spend a lot of nap time on my bed and a lot of awake time playing tug of war in the living room. I have a dog door and they’ve learned to fly in and out of it. (I must remember to put one in Mary McGill’s back door.)  My Millie is not a cocker spaniel. At least I don’t think so. She was tossed out of a car behind Tractor Supply in upstate SC before she came to live with me and might be part cocker but there is some doubt about that. I don’t care. She’s Millie the Mop and is absolutely adorable. Maggie, her best friend, is part Italian Greyhound and maybe part…terrier of some sort? She is wild but wonderful. Between them they can create a lot of havoc, make me laugh, move me over in my reading chair to make room for them, ignore me when I threaten them with death if they so much as look sidewise at my sofa pillows, and love me lots. I love them back. 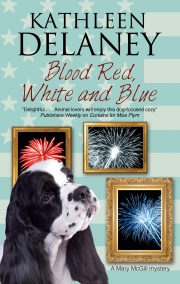 I’ve included animals in most of my mysteries, dogs, cats, horses, a cow or two, and I’m sure that will continue. I’m also sure animals will continue to share my own life. Next to grandkids, nothing is guaranteed to make me smile as much as one of my dogs or cats, or to inspire ‘what happens next’ in one of my books. But I find I no longer have room for, nor do I need, three or four cats, equally as many dogs, several horses, a cow that requires milking morning and night, a goat to keep the horses amused, chickens to supply me with my morning egg and a coop to clean, and a couple of very smart pigs. Two dogs and a cat. Perfect.