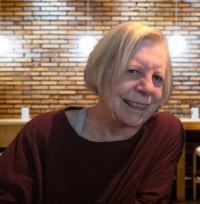 Judy Alter is the author of six books in the Kelly O’Connell Mysteries, two books in the Blue Plate Café Mysteries; and two in the Oak Grove Mysteries. Pigface and the Perfect Dog follows The Perfect Coed in this series of mysteries set on a university campus. Judy is no stranger to college campuses. She attended the University of Chicago, Truman State University in Missouri, and Texas Christian University, where she earned a Ph.D. and taught English. For twenty years, she was director of TCU Press, the book publishing program of the university. The author of many books for both children and adults primarily on women of the American West, she retired in 2010 and turned her attention to writing contemporary cozy mysteries.

The single parent of four and the grandmother of seven, she lives in Fort Worth, Texas, with her perfect dog, Sophie.

Purchase links for The Color of Fear:
Barnes & Noble  Amazon

Cats and dogs romp through the pages of cozy mysteries. Why? Maybe because pets are part of the cozy atmosphere—I’ve heard it said there’s always some good about a man who loves a dog. Pets round out the character of their owners. When we see someone react to their pet, we learn more about them as a person. Because so many cozy readers love pets, they are a good marketing tool for authors.

I’m a dog person. I had one cat for nineteen years that I adored, and there was one outdoor cat that adopted us who had remarkable spirit and personality. But mostly I tolerated the cats my kids wanted as they grew up. (Sorry, cat 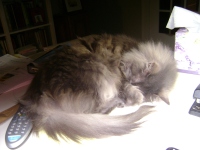 lovers!) But when I cross the Rainbow Bridge, a pack of dogs will greet me—collies both registered and the farm variety, Aussies, Cairn terriers, Irish wolfhounds, a lab mix, and even a Bernese Mountain dog. As I write, my Bordoodle, Sophie—a deliberate cross of a miniature poodle with a border collie—is lying next to my desk.

With some surprise, three or four books into my first series, Kelly O’Connell Mysteries, I realized that the only dog was barely mentioned from time to time, after one moment of glory. Kelly and her daughters lived without a dog in the first book but rescued a traumatized one in the second. Thereafter, Gus, an aging, small crossbreed, was relegated to a minor role—deaf, he slept through various threats and dangers. 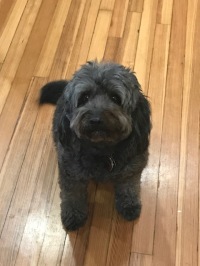 The absence of a dog seemed strange for one whose life has revolved around dogs, and in the second series, Blue Plate Café Mysteries, I introduced Huggles, a rescue labradoodle. If Huggles is not a major character in the series, he’s important relief. Huggles is everything you hear about doodle dogs—loveable, sweet, playful, intuitive about people, and smart. His instincts are good, and he does alert his people to threats. Kate’s love for Huggles highlights the compassionate, soft side of her personality.

In my forthcoming book dogs are so important that they are included in the title, Pigface and The Perfect Dog, (an Oak Grove Mystery), and are major characters. Aunt Jenny, a maiden lady who is given to fluttering but cooks wonderful down-home meals, is given a Labrador puppy that she immediately tries to transform into the child she never had. Her suitor, Judge John Jackson, raised hunting dogs and complains futilely that Lucy is a dog, not a child. And then there is Grace, the labradoodle (yes, I love doodle dogs) that main character Susan Hogan swore she didn’t want and her partner, Jake, desperately wanted. Grace, of course, becomes Susan’s dog. Both Grace and Lucy are central to the mystery and to the working out of the plot. They deserve to be in the title. Which one is the perfect dog? Each reader will have to decide. 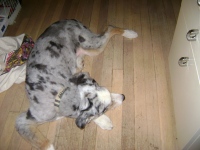 Different folks want different things from dogs—companionship, obedience, love, protection. Your definition of the perfect dog will depend on what you expect from a pet. But I truly believe my increasing inclusion of dogs in my fiction was not a conscious marketing decision, but a change born out of my love for animals and my conviction that life is not complete without a dog. Sophie? She’s companion, amusement, and an alarm system, warning me of the serious and the trivial. See that squirrel trying to invade her yard?

One caution: kill off as many people as you want but don’t dare kill a child or a dog. It’s a truism for authors of cozy mysteries. A fellow author says she was told don’t kill off a cat. I’m sure the same principle is at work.