If one reads a lot of crime fiction in various sub-genres, categorizing this novel is easy, just read page one. Indeed, the first paragraph will do it. Echoes of the best of the Golden Age mysteries from England, of the sophisticated not-quite-family-fare motion pictures of the late thirties and early forties, are here.

For the lover of the so-called Cozy Mystery, brought cleverly and carefully to the Twenty-first Century, this is a definite winner. For anyone hooked on Michael Connelly, Lee Child, the darker, more explicit often bloodier and more violent modern thrillers and even true mysteries, this novel could be a little disappointing. Still, for a clever plot, sharp, whizzing dialogue among the principals and scene after scene with the moneyed, beautiful people of New York, parading through elegant up-scale venues, I recommend this story.

Nic and Nigel Martini(!) are back in New York. Nic is a former NYPD detective who left the force to join her husband in a private investigator enterprise on the West Coast. They have been invited by a school chum of Nic to the Broadway opening of a play written by another schoolmate of Nic and Harper’s named Peggy McGrath. Readers are introduced to the players and soon, a thorn appears. The thorn is the husband of Harper. He is a prominent, curmudgeonly, popularly disliked, New York theatre critic who doesn’t seem to practice discretion or restraint in his articles. Predictably, he is soon found dead—murdered. His wife, Harper, is of course accused of the deed and Nic and Nigel swing into action to prove Harper innocent.

The pace is upscale, the dialogue is excellent and the author’s descriptions of place and atmosphere greatly enhance the overall feeling. Then, there is Skippy. Skippy is one of the largest and most unusual characters readers are likely to encounter. He is an adorable, lovely giant Bullmastiff. Skippy is three years old and fills up the room when he saunters in and sprawls on the carpet.

Reviewed by Carl Brookins, July 2017.
http://www.carlbrookins.com http://agora2.blogspot.com
The Case of the Purloined Painting, The Case of the Great Train Robbery, Reunion, Red Sky. 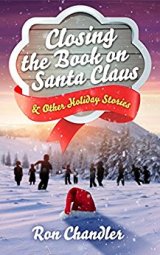 Author Ron Chandler is a free-lance writer. This collection of nine holiday stories is aimed at people for whom the holiday season can be a bit much. Overwhelming, even. Heavy on the narrative side, the stories are all well-put together with a reasonable cast of varied characters and settings. Readers will find a range of emotional tides, all relating to human relationships and ultimately holiday satisfaction, if not the highest grade of cheer.

Probably the most interesting if bizarre story, is “Inside the Glamorous Life of Lady Plum,” in which the Lady in question experiences a startlingly wide range of life experiences. Like most collections of short fiction, the quality of the writing is a bit uneven, but overall readers should be satisfied. All in all, the slender paperback is a pleasant distraction from the pressures of the season.

Reviewed by Carl Brookins, January 2017.
http://www.carlbrookins.com http://agora2.blogspot.com
The Case of the Purloined Painting, The Case of the Great Train Robbery, Reunion, Red Sky.