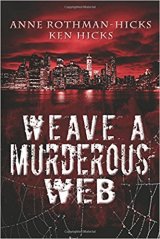 Jane Larson, a high powered litigator with Adams & Ridge, a big New York law firm, takes on a domestic case as a favor to a friend. The friend is a legal assistant at the firm, Francine, who has a friend with a troublesome divorce. Gail is model-beautiful but seems more interested in extracting cash from her lawyer husband than the welfare of her daughter. There is a suitcase full of cash that Larry Hawkins, the ex-husband, is hiding from her, and she wants Jane to find it.

After attending a Young Lawyers dinner, Jane is shot and wounded by Larry . Although this attempt on her life failed, will someone try again? Carmen Ruiz, a cable news reporter, is investigating a story about another local attorney who was believed to die of a drug overdose. Carmen, who knew that the dead attorney had dealings with Larry, thinks he was killed.  A tip from Carmen leads to the discovery of a safe deposit box with cash and two insurance policies. But Gail claims that the there’s still that suitcase out there, and she is desperate for the cash.

Unfortunately, the author telegraphed the killer early on, in a bit of back story that was out of place. It was difficult to find something sympathetic about any of the characters in this tale of lies, drugs, and murder.