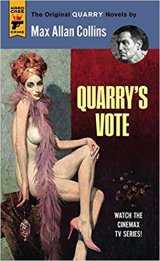 
From the publisher:  Now retired and happily married, Quarry turns down a million-dollar contract to assassinate a presidential candidate. It’s not the sort of assignment you can just walk away from without consequences – – but coming after Quarry has consequences, too.  The longest-running series from Max Allan Collins, author of Road to Perdition and the first ever to feature a hitman as the main character, the Quarry novels tell the story of a paid assassin with a rebellious streak and an unlikely taste for justice. Once a Marine sniper, Quarry found a new home stateside with a group of contract killers. But some men aren’t made for taking orders – – and when Quarry strikes off, on his own, God help the man on the other side of his nine-millimeter.

Quarry, who thinks of himself as a Vietnam-era relic, looks at himself at this stage of his life thusly:  “I was thirty-five.  I was getting bored with one-night stands and my own microwave cooking, I wanted some company and she seemed pleasant enough. She talked too much, but most people do.  She was beautiful, a terrific cook, and she kept out of my way.  What more could I ask?”  He’s been retired for nearly ten years, having used the name “Quarry” during those years when he was a paid assassin.  Written in 1987, the book at times seems prescient:  “We are coming into a fascinating election year.  The two parties – – depending upon whom they choose as their standard bearers of course – – should be in for a real battle. Think of it:  the highest office in the land up for grabs…we could have a true conservative in the White House . . .”   He turns down the offer, despite the big bucks involved.  And the situation leaves him deeply unsettled, threatening the life he has come to love, as people such as the ones making this offer don’t like to leave any loose ends.  Thinking of his wife, he muses “She was a sweet kid. I didn’t deserve her, but then who does deserve what they get in this life, good or bad?”

The ensuing tale of killers chasing a killer, who is in turn chasing them, is wonderfully well written.  A target is described as a “wealthy paranoid political crackpot who thinks the Soviets are after him.” When Quarry is asked “Are you a detective or an assassin,” he responds “Necessity has turned me into a little of both.”  When Quarry enters an upper-middle-class residence, he thinks  “It was the home of somebody who used to bowl but now golfs.”  His writing has been called “classic pulp fiction,” but my own take on it is that it is as enjoyable as anything being written contemporaneously.