Lauren Carr is the best-selling author of the Mac Faraday Mysteries, which takes place in Deep Creek Lake, Maryland. Killer in the Band is the third installment in the Lovers in Crime Mystery series.

In addition to her series set in the northern panhandle of West Virginia, Lauren Carr has also written the Mac Faraday Mysteries, set on Deep Creek Lake in western Maryland, and the Thorny Rose Mysteries, set in Washington DC. The second installment in the Thorny Rose Mysteries, which features Joshua Thornton’s son Murphy and Jessica Faraday, Mac’s daughter, A Fine Year for Murder, was released in January 2017. The next book, Twofer Murder, will be released at the end of the year.

She lives with her husband, son, and four dogs on a mountain in Harpers Ferry, WV. Visit Lauren Carr’s website at http://www.mysterylady.net to learn more about Lauren and her upcoming mysteries.

Most writers have heard of the phrase ‘to kill your darlings,’ and with practice become very familiar with its meaning. This phrase was originally spoken by William Faulkner who said ‘in writing you must kill all your darlings.’

In writing, a darling are those phrases, scenes, or even subplots, that the writer loves the most, but which fail to move the story forward. Over the years, I have become so adapt at recognizing my darlings that I can pick them out as I am creating them. However, it is only recently that I have come to realize that a darling can also be a character who needs to be killed off. 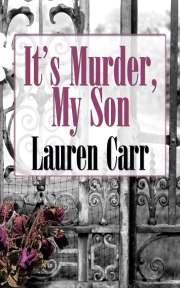 Several years ago, a journalist asked why I regularly killed off my male protagonists’ wives. My response was a dropped jaw and some stammering until I came up with a lame, “Well, I like for my protagonists to be available for romance.”

It was after this interview that I wrote It’s Murder, My Son, the first installment in the Mac Faraday Mysteries. A few months ago, I found the very first draft of this book in some old folders on my laptop and read through it. I was shocked to realize that the very first draft of this book was nothing like the final release—mainly due to killing off one of my darling characters.

In its final form, Mac Faraday is newly divorced when he moves to Spencer, Maryland. After twenty years of marriage, Mac’s wife leaves him for another man. He ends up with their maxed out credit cards. On the day that their divorce becomes final, Mac inherits a fortune from his birth mother, Robin Spencer, the American version of Agatha Christie, and her estate on Deep Creek Lake.

In the first draft, best-selling mystery author Robin Spencer was Mac Faraday’s wife. As with the final product, Mac was a retired homicide detective.

The Faradays had a loving marriage and lively banter between them. They even had a German shepherd, but his name was not Gnarly. He was well behaved and played no role in solving the mystery.

So, you may ask, why did I kill Robin Spencer off? Is there some deep-seated hatred I have toward wives of my protagonists that makes me want to kill them?

As I read through this first draft, years after having written it, the answer came to me halfway through the book. In life, Robin Spencer failed to move the plot forward. While she started out well in the mystery, by the middle of the book she became the adoring wife telling Mac how smart he was.

In an interview, the host asked Pamela Sue Martin why she quit what was a successful television show. Her reply was that she did not want to play a character who was reduced down to saying, “You go catch the bad guy. I’ll call the police.”

Reading this first draft of It’s Murder, My Son, I saw that in life, Robin Spencer was reduced down to little more than that. “Here’s all the clues, Mac. You go catch the bad guy and I’ll have soup and sandwiches waiting for you when you get home.”

So, I did what every good writer does. I killed her off.

In the final release, Robin Spencer is Mac Faraday’s late birth mother. Robin had been an unwed teenager when she had Mac and had given him up for adoption. Upon her death, she left her entire estate to the homicide detective, which included her mansion in Deep Creek Lake, a five-star inn on top of Spencer Mountain, and her journal through which Mac and his family learn exciting tidbits about the mystery author’s life.

So, it is with a sigh of relief that I have realized that I do not have a subconscious issue with my protagonists being romantically attached, which forces me to kill off their mates. By killing off my darling character, Robin Spencer, I gave her new life—a more rewarding role in the Mac Faraday mysteries.

Whew! What a relief!

One lucky reader here will win a
downloadable audiobook of
Candidate for Murder
. Just leave
a comment below naming any
main character(s) in mysteries you
wish the author would kill off.

The winning name will be drawn
Monday evening, July 3rd. 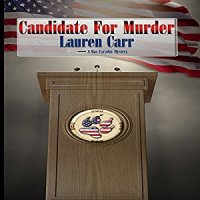