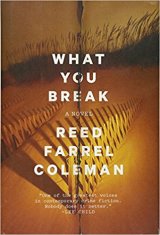 
Michael Connolly has Los Angeles, Ian Rankin Edinburgh, Laura Lippman Baltimore; the late Robert Parker Boston; Tim Hallinan Bangkok.  Others write about localities they know.  And Reed Farrel Coleman not only lives in Suffolk County, Long Island, New York, but takes us on a guided tour, in this novel featuring his somewhat flawed ex-cop Gus Murphy, still suffering after the death of his 20-year-old son, John Jr.  Gus, divorced after the death blew up his marriage, lives and works at a second-rate motel, driving a van to and from MacArthur airport and a LIRR station, picking up and dropping off passengers to and from the Paragon and providing security services in exchange for a free room.

The night bellman, Slava, who had once saved Gus’s life, is a close friend. When his friend’s past catches up with him and his life is threatened Gus is faced with a dilemma: sacrifice his friend or attempt to help him.   Meanwhile, another of Gus’s friends, the ex-priest Bill Kilkenny, asks him to take on finding out why wealthy Miceh Spears’ granddaughter was murdered.  The two plots move along simultaneously along the highways and byways  stretching from Queens County and Brooklyn right across Long Island.

Coleman even delves into the social and economic differences between various localities, with the Long Island Expressway sort of dividing north (white and wealthy) and south (for the most part poorer) and how enclaves protect the richer from others.  The novel takes a penetrating look at Gus, his personality and psyche, his assets and flaws.

A good read, the novel is recommended.